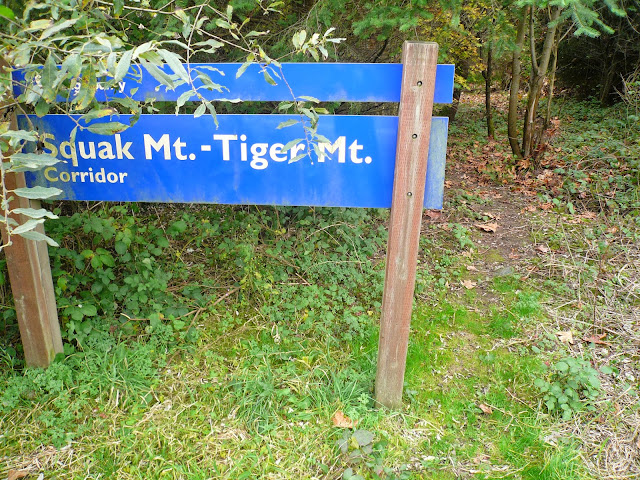 In the current trail configuration, connecting Cougar and Squak in the Issaquah Alps is simple, but connecting Squak to Tiger is a suburban road run pain in the butt, despite the fact that the two mountains are directly adjacent to one another, and despite the fact that King County Parks owns the land connecting West Tiger to East Squak.  (This map illustrates nicely how intuitive a Tiger/Squak Connection would be, with a trail running through the corridor from the Squak trails to Chirico.)   Trail runners in particular have devised workarounds to complete Issaquah Alps traverses, but the lack of direct connection between the trail systems has meant that Tiger/Squak combo runs have been impractical for anyone without an Issaquah road map.

It looks like that problem is on the verge of being fixed.  Due to some diligent work from the trail running community, a boot trail has been cut in which starts directly to the right of the sign above and connects to the Squak system at the East Ridge Trail (I believe that is what the trail is called where it connects - can anyone confirm?), and some folks from the Seattle Running Club have been working with King County Parks to get approval, and my understanding is that they are supportive of developing this trail for public usage.  Today, I took a self-guided tour to see how things are shaping up.

The trail itself is still a work in progress, but it is shaping  up nicely, and its main problem, in my opinion, is the lack of an exciting name to get the kids excited about the project.  It's going to be a fantastic addition to the Issaquah Alps trail system, and folks should hear about it.  That's why I suggest that it be christened the "Pee Pee Peak" trail.  While Tiger - Squak Connector Trail is definitely informative, who wouldn't want to run or hike the "Poo Poo Pee Pee" corridor on at least a weekly basis?  The trail climbs to a high point with peekaboo views of Tiger to the East before connecting in to the larger Squak System, and I see no reason that this area shouldn't have a plaque and a bench and an official title of Pee Pee Peak.  This might be TMI, but I even relieved myself there to make sure the title is accurate.  (Apologies to all involved for everything in that paragraph, and special apologies if this name sticks.)

I don't know that I should be officially encouraging people to use this trail yet, because it is still being developed, but if one were interested in such a thing they might find the following logistics helpful.

The trail starts directly to the right of the sign above (you can actually vaguely see the trail in that picture), and immediately crosses a small stream, and then a larger one that requires you to either ford and get your shoes wet, or use this precarious dead tree bridge which will eventually break and send someone tumbling into the icy depths below: 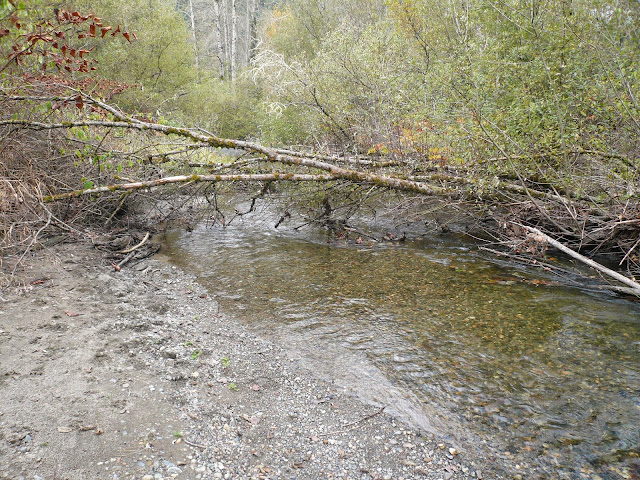 I chose the tree bridge, but ominously, the river had already claimed one victim:

After the stream crossing, you wind through several bunches of blackberry bushes to the only place on the trail that is slightly difficult to navigate, even with fall leaves covering the trail - a powerline road where  you need to turn left and look for the trail, which veers off to the right after about 1/8th of a mile.  The only thing tricky here is being sure to turn left at the road rather than right, but that isn't really that tricky because if you turn right you quickly end up at a gate and 'private property' sign, which is clearly not the trail.  After you find the trail into the woods (it's basically at the first point that there aren't blackberry bushes), it's easy to navigate, and is already worn in enough to follow more easily than, say, the trail to the top of Mt Teneriffe at night, or the trail up Mailbox in the snow - which is to say I never lost the trail.  At this stage enough folks have been up it to have worn things in really well, and people have clearly been hard at work clearing trees and so forth:

The logistics of the trail after you get into the woods are straightforward - you follow a series of reasonably graded switchbacks through old growth up the side of Squak, over a couple of small crests, until you get to the intersection.  It's currently still probably best experienced as a hike rather than a run (I found myself tripping on brush and slipping on loose ground even at hiking pace), but it's a great piece of forest.  It was foggy today so the woods had an ethereal feel about them, I'm pretty sure I heard a pileated woodpecker (didn't spot it so can't be sure), and there are some nice peekaboo views through the trees at the top (although my camera didn't do a great job of capturing them.  I heard you can see Rainier from a spot on the trail as well, but the sky was socked in to the south, so I can't verify.  I'd estimate that this section of trail is about 3 miles long, and it took me a little over 2.5 hours to do the out and back.  It is being developed for pragmatic reasons as a connector trail, but I really feel like it stands on its own as an out and back if you're looking for a more rugged trip and more dense woods than Chirico offers.

I actually don't have a clear idea about whether there is still more permitting work that needs to be done to make this trail 'official'.  They took down the old road barriers that you used to have to jump to get into the area, and there has clearly been a ton of work done on the trail, so it seems like the project is a go.  If any readers know more details about the project, or how folks can help with the trail's development, it would be great if you could leave info in the comments below!

In the meantime, here are some photo highlights from the trail: 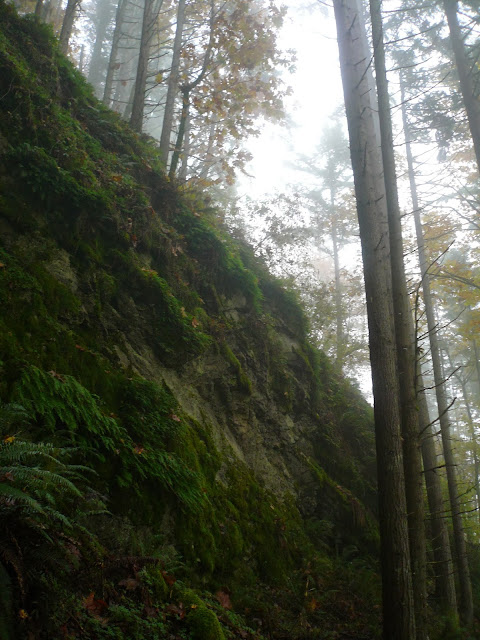 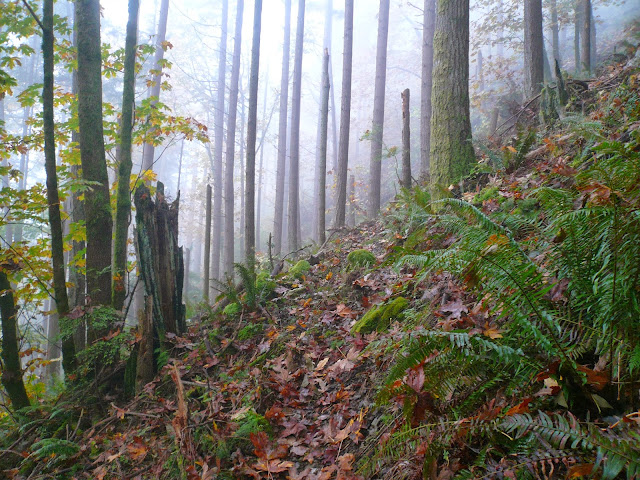 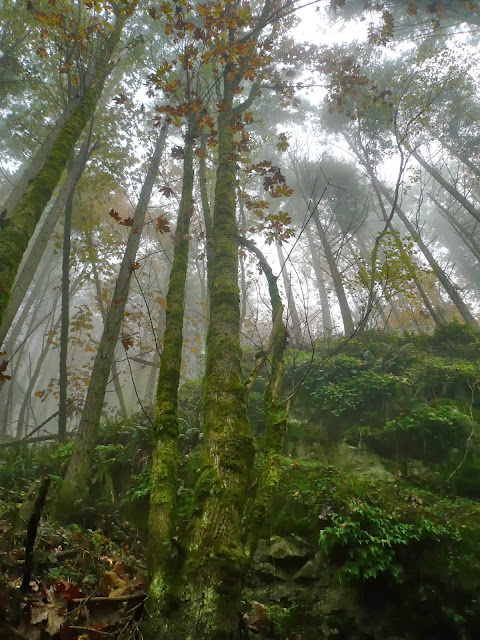 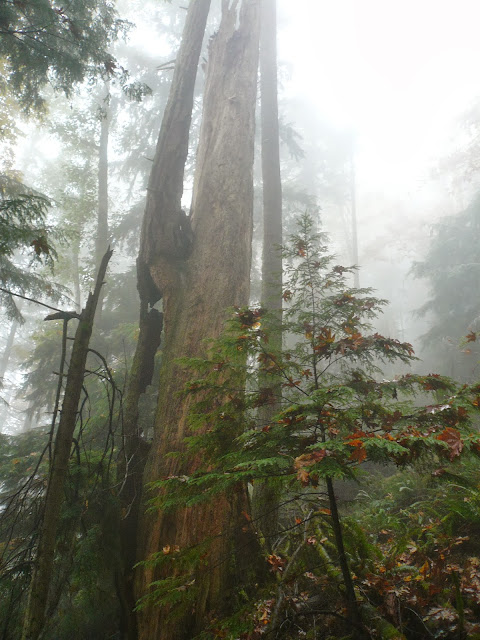 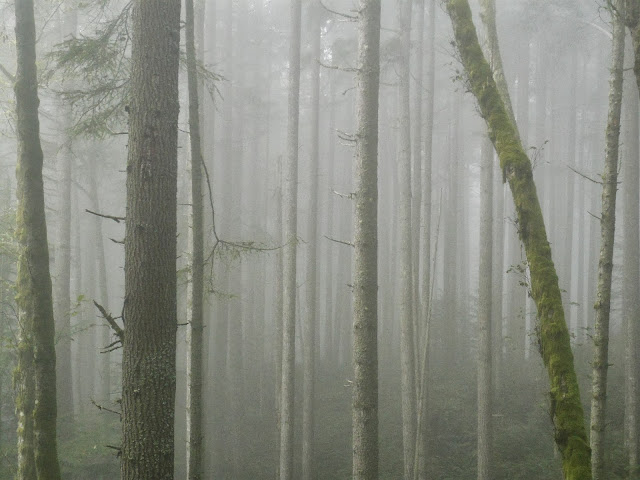 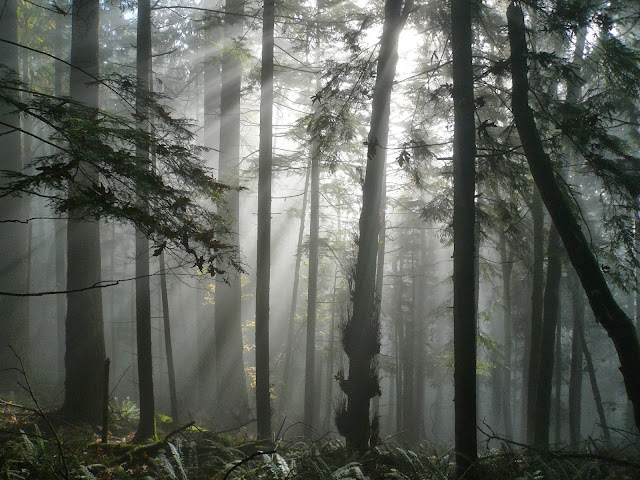 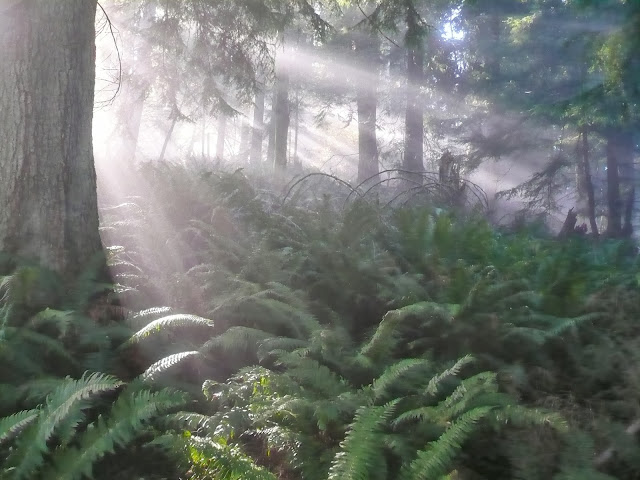