Running the Camino: Some General Impressions 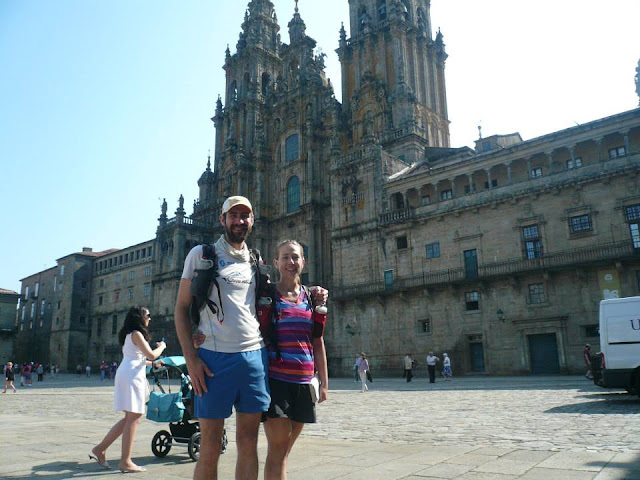 Well, that was fantastic.  I've got a couple of things I want to write-up re: the Camino, but to generally get the processing going, and to get folks caught up, here are some initial thoughts about our recent trip, where we ran/walked/limped El Camino de Santiago in Spain.  (For a step by step report, read Angel's blog on the experience here)

If you aren't acquainted with it, the Camino is a 780 kilometer trail that starts, traditionally, in St Jean Pied de Port in Southwestern France and finishes in Santiago de Compostela 90 km from the western coast of Spain.  People have been walking it for centuries as a pilgrimage, because St. James' (or, Sant Iago in Spanish) bones were discovered in the woods there sometime long long ago (let's not get in to whether or not they're actually his bones - immaterial at this point I suppose).  There are a bunch of potential variations on the route (it's actually more accurate to speak of "Caminos" than one Camino), but the only one we took was completing the 90km "Camino de Finisterre", which is a path that continues after Santiago to the coast of Spain, to a traditional European "End of the Earth" (we also won't go in to whether it actually is the end of the earth.  Let the people have their fun.) Nowadays all sorts of people walk it for a variety of reasons - tourism, reflection, mysticism, fun, because it's there - and there is an impressive infrastructure around it.  It's signposted better than any race I've ever participated in for the full 800km, and there are remarkably cheap and well-maintained "albergues" (basically youth hostels exclusively for pilgrim use) every 3 - 5 miles the entire way (excepting a couple of sections where they're a couple more miles apart).  There are even more restaurants and pharmacies, so the entire route is basically a walker's dream.  If you didn't mind being really smelly, I'm not exaggerating by saying that, in the summer, you could survive doing the whole thing with just a water bottle, the clothes on your back, and 25 euros ($30 US) a day.  (In the winter, you probably would also need a sleeping bag, a warm coat and a poncho.)

For a similar set of reasons, the Camino is also a trail runner's dream, and while most people walked, we ran probably 75% of the way.  The set up for running was even better than I'd expected, and we got by with just day packs - a change of clothes, a jacket, a sheet, some toiletries and a couple of water bottles.  There were shoe stores along the way in the bigger towns (Solomon's everywhere), and Angel bought a new pair b/c she'd started out with a pair she'd been using for awhile.  Other than that and a few toiletries, we didn't buy or throw out anything other than food the entire way.  Minimalist was, without a doubt, the way to go, and people commented more on how small our packs were than on the fact that we were running - they weighed about 8 pounds when we were carrying food and our water bottles were full.  For the distances we were doing, the set up was perfect - it can be blazingly hot in the Summer in Spain, but the mornings are cool, so we'd wake up and generally be done with our running/walking by noon or 1, when things started to heat up.  We fueled almost exclusively on sandwiches (Spanish bocadillos made with baguette, ham and cheese), pastries, coffee and Coke, and when we finished our day, we'd do laundry and spend the rest of the day eating, drinking, and sitting around talking.  (There were a couple of days when we went to see the sights, but the Camino is basically all sights, so it didn't feel like a waste to spend an afternoon at an albergue or restaurant.)  The trail was as varied as one would expect when crossing an entire country- there were a few days in the mountains, a bunch of days on rolling hills, and a bunch of days on plains, with a mixture of double track/gravel road (the most common surface by far), asphalt (maybe 20% of the total?), and a little bit of single track (maybe 5%).

We met just a couple of other runners along the way, and we were, by far, the least ambitious - averaging about 30km a day, including a few 40 - 50 km days, and a few rest days. (There were a fair number of walkers who finished in less time than us - mostly Eastern Europeans.  Those people are hardy.)  One guy we met, Phill Sly, was a 2:15 marathoner who was planning to finish in 2 weeks (that averages out to about 55 km/day), and another guy, Tristan Bamford, had started relatively modestly with about 35km/day, but by the time we met him he was in the middle of a series of 70 km days.  The day after we met, he ran 127 km (!) - or almost 80 miles (!).  The craziest thing we did was run the 90 km Camino de Finisterre in a day after completing the Camino de Santiago, which is a story for another post because it ended up as quite the epic experience.

The trip, over all, was really remarkable - different from any other running experience I've had.

It wasn't a race, but because there was a start and end point, it was a goal directed process that seemed to boil life down to the basics in the ways that endurance racing sometimes can - you primarily just think about how to take care of yourself so you can keep moving.  Because you're doing this for 3 - 5 weeks, it becomes a rhythm of life rather than just a couple hour experience.  One of the things I've loved about trail running culture is that it focuses on connecting with the basics of human existence - eating, resting, working, repeating - and the Camino was an extended experience of that.  People repeat it multiple times, I think for the same reasons that Angel and I go into the woods a couple times a week.

Running the Camino meant that we were approaching the experience in a different way than other people, but, in my experience, didn't hurt our ability to develop relationships along the way (maybe particularly because we didn't do more daily mileage than a lot of walkers).  Everyone approaches the Camino differently, but there's a unique sort of camaraderie that develops because of the shared struggle, and the fact that you generally don't have anything to do in the afternoons besides get to know people.

One of the other things I've loved about trail running culture has been seeing people (including myself) move from being out of shape to doing things they never thought they could - going from couch to ultramarathon, and so forth.  The Camino was a similar, very condensed experience of that.  Doing what you do on the Camino - walking 15 - 30 miles a day for 3 - 5 weeks, isn't something almost anyone does in normal life, so most people go through a period of pain, blisters, and questioning if they can do it, but then start to see their bodies adapt.  Some people take the trip explicitly because they want to get in shape, or because they want to see if they're capable of doing it.  It was remarkable to see people who were laying in bed in puddles of tears and blister pus on day 7 come in to Santiago strong, happy and proud on day 30.  The scene at the Santiago Cathedral was not unlike the finish line at, for instance, the White River 50 that happened this Saturday.  It reminded me that the gap between unhealthy and fit is actually not that wide, and that it's best to start from the assumption that you can do amazing things if you decide to and stick with it.

It was also almost impossible not to feel like you were doing something significant.  Being a pilgrimage route, a lot of people, maybe even the majority, do the Camino for some reason - either during a period of transition, or after loss, or trying to find themselves, or for some religious reason.  Because of that, you meet a series of remarkable people along the way.  We met a 70 year old Belgian guy who was doing the Camino to process his son's death, for instance, and we heard about someone doing it despite the fact that they were blind.  There was a former paraplegic who had been told she'd never walk again, and a family who had walked from the opposite side of France with two young children (4 and 1, I'd estimate) and a donkey.   If you're the type of person who likes serious conversation, there's lots of that happening, but even if you're not you end up thinking about things.  I'll probably write more about that later.

It was so remarkably cheap.  Eating and drinking as much as we wanted, Angel and I each spent about $40 - $45 US a day, including accommodation.  If we hadn't stayed in a couple of "expensive" ($70 US/night) hotels, it would have been even less.  Minus flights, you can easily do the whole Camino for $1200 US without skimping.  Seriously, no joke - a month in Europe for $1200.

There are a lot of people who bike the Camino, but at this stage very few who run it, and I really think more people should do it.  Think stage race through beautiful rural Spain without the pressure of competition, and when you add a daily dose of runners high/endocannabinoids/endorphins to the normal Camino routine, you come away with an extended period of joie de vivre.
Email Post

Anonymous said…
im spaniard runner...really a begginer hhehehe...and 5 times camino finisher, 2 walking and 3 bike, i was thinking about running it, and now tehn read you im sure i will do it!!! congratulations !!!
July 29, 2013 at 8:57 AM

Anonymous said…
im spaniard runner...really a begginer hhehehe...and 5 times camino finisher, 2 walking and 3 bike, i was thinking about running it, and now tehn read you im sure i will do it!!! congratulations !!!
July 29, 2013 at 8:58 AM

I have a friend that leads MTB tours along this trail and always has a good time. You guys are sure checking all the bucket list boxes.
July 29, 2013 at 1:46 PM

Unknown said…
We don't mess around when it comes to bucket listing!