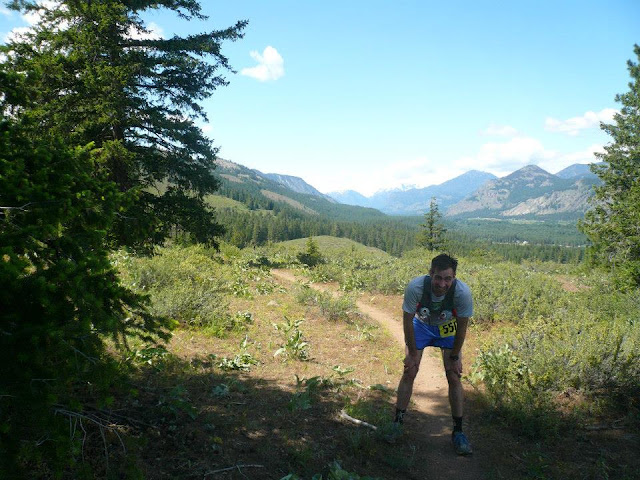 Rainshadow Running hosted the Sun Mountain 25k/50k/50 Mile races yesterday in Winthrop, WA.  I don't know about the 25k and 50k options, but running the 50 miler was hard.   It's not really the elevation that gets you (7500 ft or so of gain and loss), or the technicality (not much, really - soft trail the whole way when I was kind of expecting dust and rocks).  It's just that 50 miles is a long way to run.  And also, it's just that James Varner, the race director, put in the hardest climb at mile 45 (or mile 46 if, like me, you did some bonus miles early in the race), because he likes to see people suffer.  The course, theoretically, was easier than the only other 50 I've done at White River (and I did in fact improve on my 50 mile time there by about 20 minutes, finishing in 9:40), but it was more of a psychological struggle.  It wasn't as hard as that crazy crap that a bunch of us tried in the Issaquah Alps a few weeks ago, but still hard.

I'll let others report on the other distances, but on the 50 mile side, Seattle favorite Adam Hewey got the win by holding off Colin Miller, one of those stinking North Vancouver Canadians who keep invading our country and taking all of our races.  Adam's time was a 6:49, which, for those keeping track, was about 3 hours faster than mine.  In my defense, after the race his blood tested positive for performance enhancing burritos.  On the women's side, Stacey Cleveland from Penticton, BC won in 7:19.  The race's most notable runner, my wife Angel Mathis, ended up with her first DNF, which sucks, but was kind of predicted because she's been sick on the couch for two weeks with some kind of viral plague that seems to have turned into a sinus infection.  Impressively, she still managed to gut out 27 miles during which she reported not being able to breathe, sitting down on the side of the trail, trying to find a spot to take a nap, and walking the 7 miles between the final two aid stations she passed.  She also reported that she would have dropped at mile 20, but was inspired at that aid station by Cam Painter's colorful tights to keep going another 7.  Guts, determination, and questionable fashion sense.  Her husband is a lucky man.

I know I said I wasn't going to report on the other distances but I would like to note that, in the women's 50k race, our friend and relative newcomer to trail racing, Jaime Clark, finished 2nd woman and 6th overall in 4:29  (17 seconds behind the winner Sara Mathewes from OR) in just her 2nd 50k.  I would like to officially offer her a sponsorship from alittlerunny that includes a patch to put on her hydration pack, any of my old tech shirts that she wants, and event transportation in the form of a carpool to any race that both of us happen to be running.  (Angel already called shotgun.)

Personally, I had an unusual day.  The first 14 miles of the course were relatively flat - rolling hills to shake out the legs before the climbing starts - but I didn't feel particularly great.  I don't know if it was the early start, or the lack of sleep from clinical commitments during the week, but I wasn't into it early on.  It was probably only about 45 - 50 degrees, but we were running through exposed fields and for some reason the sun was getting to me.  On top of that a course arrow had blown over, and a large group of us ended up off track, which added on probably somewhere between 1 - 2 miles.  Between miles 14 - 20 was the first climb and descent of the day.  It was 1000 feet in each direction, and very manageable on the Rainshadow scale, but by the mile 20 aid station I was feeling remarkably bad for so early in the race. Luckily, I was able to diagnose one of my major issues, which was that the electrolyte drink I was using was making my stomach feel consistently like crap.  (I haven't run with electrolyte drink in about 6 months, but I figured that since it would be sunny and hot I'd go for it.)  I dumped that garbage and switched my fluids over to plain water plus an occasional slug of Hammer Perpetuum - an endurance-specific product I was trying out for the second time, and which I was actually really happy with.  I don't know that I'd use it exclusively (it's marketed as the only nutrition you'll need during a race), and I definitely want some plain water for hydration, but it was almost immediately soothing for my stomach when I got all acidic from Shot Blocks and gels and oranges and watermelon and coke.

Between miles 20 and 35 there is a gradual 1500 foot uphill and descent, most of which is under tree-cover, and I felt as remarkably good during this section as I did remarkably bad during the first part of the race - which is to say, I have no idea how running works.  One key, I think, was that psychologically something clicked at about mile 22, and I decided to adjust my expectations of the race from "Maybe I'll have an awesome race and find out that I'm great at the 50 mile distance" to "Maybe I'll just have a nice long fun run where I won't die".  After that, when I'd start to feel like crap, I'd ask myself "What would a fun runner do?"  The answer was usually walk, take some pictures, eat something and lighten up.  So I did take some lovely pictures along the way: 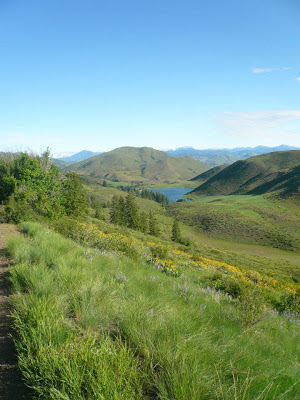 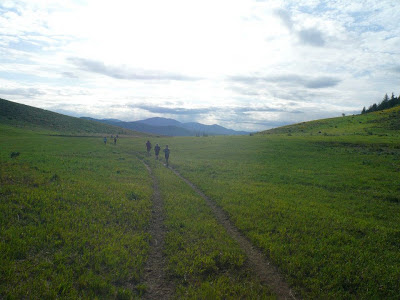 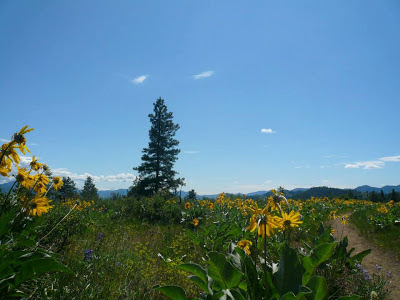 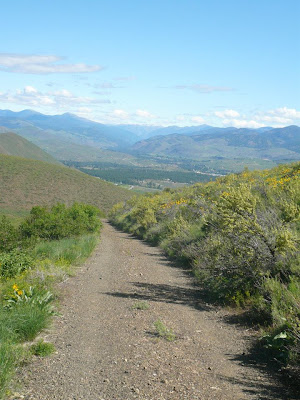 Miles 35 - 40 included the third big climb of the day, which was exposed to the sun (probably about 75 degrees by that point) and felt predictably hard, but I was still in good spirits.  Great view at the top near the Sun Mountain Lodge: 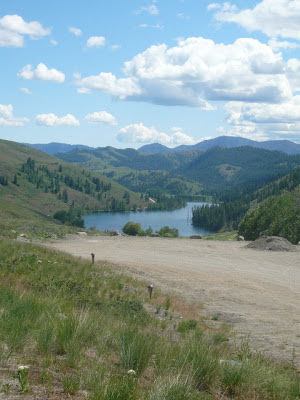 By the time I made it to the final aid station at mile 44 point something, I was surprised at how quickly I was moving.  I asked a volunteer how much further it was to the end, and when they told me about 6 miles, I thought, "Damn, if I can keep 12 minute miles (not unreasonable), I'll finish in the low 9-hour range!  I must be really good at 50 milers!"  Then they pointed at a giant mountain and said, "Yeah, you just have that one big climb and down, and you're done!"  Then I thought "Dammit dammit dammit dammit dammit dammit dammit."  I'm pretty sure that was the steepest, most exposed, most sustained climb of the day, and it seemed to go on way longer than the reported 2 miles (although I'm sure it actually didn't). At that point it was great to know that I was going to finish, but my climb was fueled primarily by curse words and bitterness.  I'd been leapfrogging for most of the run with my friends Tho and John, and a guy I met on the run named Ryan, and they were helpfully encouraging at that stage.  John had been vomiting early in the race but somehow managed to rally at the end, and dropped us all on the final downhill, which I have to say was pretty impressive.  By that stage in the race, I was walking some even on downhills, but was, for the most part, able to run it in the last few downhill/flat miles.

Overall the event was a typical Rainshadow race, which is to say really fantastic:  Amazing scenery the whole way in one of the prettiest spots in WA (and hence the world), a course that was challenging enough to make you feel like you accomplished something significant in finishing, great support and aid, good marking (despite the blown down arrow) and race communication, and an after party where you hang out with friends and celebrate achievements, drink beer, eat pizza and cheer in the rest of the runners.

Lessons learned, for my edification and yours:

1) Sun Mountain is a really scenic race - consistently beautiful for the entire course.

2) Traditional electrolyte drinks are not worth the stomach distress for me.  I do better with water, fruit, gels/shot blocks, Perpetuum, and s-caps in a pinch if there's no salt and potatoes at aid stations (my strong personal preference).

3) My Ultimate Direction SJ pack is passable, but I'm not convinced that it's optimal - for the first time I got pretty annoyed with the front-mounted bottles, mainly on the downhills after mile 40, because they were bouncing and hurting my ribs.  I've never had that issue before, but I've also never worn the pack for anything over 50k before.

4) I think my feet are getting bigger/heat makes my feet swell - I'm probably going to move up a half size for the Camino and Cascade b/c by the end my 13s felt tight around the toes in the heat.

5) Doing anything the second time is easier than doing it the first.  Going in to this 50, I was a bit nervous because I haven't gone that far in about 9 months, but I never really doubted that I was going to finish because I was committed and knew I have a high enough tolerance for suffering to make it through, even if I ended up being super slow.  In the end, I finished in about the time expected beforehand, and faster than White River, despite not feeling nearly as good as I had in that race.

6) The feeling of a genuine ultra, for me, is the feeling of shifting from "I just have to see how fast I can run this distance" to "I have to figure out how to keep eating, drinking and moving without passing out", and I usually define a tough run as one where I end up walking sections against my will.  I've had a couple of good ultra experiences in the last few weeks, and a couple of tough runs.  It puts to prospect of 100 miles in good perspective for me: eating, drinking and moving for way longer than you want to.  If all goes as planned, in a couple of months I'll be giving it a shot.
Email Post

LukeD said…
Great read Tim! Sorry we missed meeting up somehow. I ran the 50k and will have a report up soon.

Ryan Yedlinsky said…
I had a blast too, and it was really nice to meet you (and trade positions with you for a good portion of the race). I didn't realize we had gone off course until the end, and John pointed that fact out to me.
May 21, 2013 at 4:47 PM