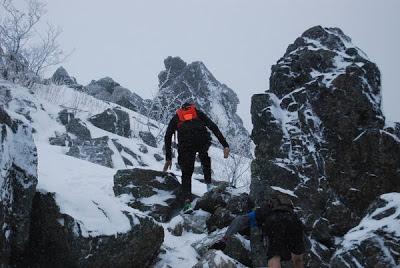 Mt Si is only about 45 minutes from downtown Seattle, but Angel I lived here for 7 years before we climbed it.  It wasn't that we didn't get out and about - we did a fair amount of hiking and trailrunning during that time period.  It was just one of those situations in the vein of locals never visiting the tourist spots.  I heard about it a lot, and so always thought that it couldn't be that great.  But I climbed it again on Thursday - probably the 10th time doing so since I went up for the first time last January - and it gave me some thoughts.

1) It's a busy place, and on the way up hikers regularly say things like "Are you running up this?!"  I don't know about any of you, but I feel really dishonest when I say yes.  I imagine that there are a couple of people out there who could make it up, but I don't know that I've ever made it more than 1/4 mile at any one time on the ascent of Si while genuinely running. 4 miles and 4000 feet of climbing is hard.  I try to walk up it really fast - like the way you walk to the bathroom when you really have to pee.

2)  Having said that, once you reach the peak and turnaround, the descent of Si really is just about the perfect trail run.  Every time I do it, at some point I think that it's my favorite run anywhere.  It's entirely downhill on nice, well graded, runnable trail. I actually only move at 9 - 10 minute mile pace, but there are always sections where I feel like I'm downhill skiing.  Makes you feel alive.

3) In that vein, I do think that Mt Si is my overall favorite local place to run, pretty much any time of the year.  In summer it's close enough to Seattle that you can get there and to the top for sunrise before work, or for a sunset picnic after work, and I'm always surprised at how good the view is.  In the winter you go through a great transition from mud to slush to ice to snow before reaching the rocky outcroppings at the top, which are really cool, even if you probably won't get panoramic views of anything but cloud.  It's a rewarding hour-ish hike to the top followed by an amazing 30 - 40 minute run down. It's a great fitness test that lends itself to comparing your time against your own previous bests and other runners.  It's challenging, and dangerous in an exhilarating way if you haven't done a fair amount of downhill running, but it's accessible enough that you probably won't hurt yourself if your ankles and quads are in average trail shape.  It's got a history - Scott Jurek did repeats there back in the days when he was winning Western States (he would do three at a time).  One time when she was trying to upgrade by flirting with him on a promotional run, Hal Koerner (who won Hardrock last year, which is arguably the hardest run in the country, and who used to live in Seattle) told my wife that he never managed to do more than two, which I think is probably a lie.  Even I did two once (although I've never been more sore).  He must've meant that he never did more than two in an hour.  Mt Si is great for visitors too, because there's basically no way to get lost - one switchbacking trail to the top.  If you want more options, there is single track that connects to Little Si and a logging road or deer trail option to the top of the connecting Mt Tenneriffe.  And it's a Seattle icon that lives up to its reputation - unlike the stupid Space Needle.

4)  I want to do more writing about local favorite runs.  It's easy to find trail reports from hikers, and race reports from runners, but it's hard to find local trail guides written by runners.  There are so many trails worthy of appreciation around here.

5) Here are some pictures of meaningful moments on Si, in winter and summer.