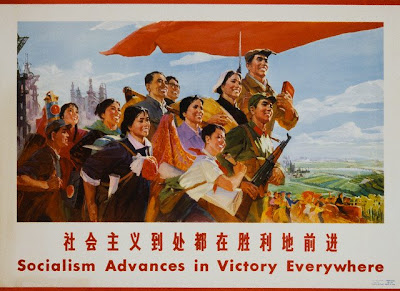 There is a syndicated op-ed columnist that Angel and I like named David Sirota. This morning his column was on all of the McCain 'spreading the wealth around' talk. His point, which I thought was a little crude at first, was that either Senator John is the dumbest candidate ever, or that he's willfully deceiving us with the suggestion that 'spreading the wealth around' is something that only Democrats and 'Socialists' and 'Communists' do. It's clear that the second option is the correct one - anyone with a basic understanding of how taxes work gets the fact that 'spreading wealth around' is what government does (period). The question is just where it gets spread the thickest - Republicans in recent years spread it most thickly on corporations and the upper classes (and all who benefit from the benevolent intervention of the American military). Democrats haven't done much better, but they have given a little more to the middle to lower classes and public infrastructure. This year Obama's campaign is just reviving a very American tradition, and openly suggesting again (With FDR, LBJ, etc.) that the uber-rich should pay a higher percentage of taxes than the uber-poor. That used to go down like (evil commie enemy monster) socialism. In our health care-, job- and infrastructure-free society, it just goes down (again) like sensible social policy.

It's clear that McCain's playing a cheap and desperate card here, and easy to see what he is doing - trying to create an image in the voters mind of Obama as the commie/terrorist/socialist enemy and the other guys as the free market, keep what you earn ol' fashioned God-loving Americans. It's working with some elements of our society, but I have do admit that it seems that a lot of people have wised up, despite the Fox/Limbaugh ideological punditry and despite the ignint folks shouting the insults at the rallies. Have we finally gotten past the point where 'socialism' can be broadly taken as something other than a pejorative in America? Generation Y, after all, was formed after the fall of the Iron Curtain, and has grown up in a global village where tempered 'socialist policy' (read: nationalized social support systems including education, health care, bank insurance, etc.) can be recognized by the level-headed as having had a positive social impact in every western country, our own included. Has the tide turned for those of us who identify as socialists in America?

My Debbie-downer skeptical (realist?) nature forces me to say no, probably not. Most people I would guess still think being a socialist is bad and sinful and unamerican. It's just that other things are seen as worse now - like starting unnecessary wars, letting your minority citizens die in hurricanes, letting health care become inaccessible to even the middle classes, destroying your environment, picking offensive jokes for vice-presidential nominees, lying openly to your citizens and causing the world economy to collapse. We're still probably not sold on Socialism. Maybe in 50 years or so (once the Cold War generations are dead and gone) we'll be able to talk sensibly about what works and what doesn't, but for now we're stuck with 'socialism' as something to be espoused only in whispers behind closed doors, and ideology as a barrier to sensible political policy.

For now, when policy is sensible and it works, let's pretend that it isn't Socialism. Let's just talk about spending the tax money that gov't collects in the most just, egalitarian way possible - making our country livable for its citizens and reducing murderous imperialist spending, making the world a better place for all to live in, rather than concentrating money and power in the hands of the few. Let's pay attention to the victims of laissez-faire capitalism and try to address their concerns, but lets pretend that it has nothing to do with 'the American way' (as if there were such a thing) having flaws.
Email Post
Labels: class me being liberal My Philosophies for life Politics

Anonymous said…
It's a bit of a stretch to call anyone in the U.S. a victim of laissez-faire capitalism. Don't you think?

A governmental system that tampers with the market or the income of citizens in any manner is not either a socialist or a capitalist system--it is socialist whether it performs well or poorly, whether taxes are allocated appropriately or not, and whether you're a proponent of welfare or warfare or both. Though, I do tip my hat at your attempt to make socialism somehow not socialism, but a set of really really good ideas.

The simple fact that Republicans cry out against socialism or "sensible political policy" does not in fact make them the torchbearers of capitalism. Quite the opposite--it makes them hypocrites and liars, as we can all plainly see.

I'm really interested to see how Democrats will run the socialist modern unitary state, and will be taking notes for the next few years as if I dont already know the outcome. I hope the Daily Show and Colbert Report will still be around, if nothing else.
October 27, 2008 at 6:21 PM

Anonymous said…
1) I don't think so really - although 'laissez-faire capitalism' isn't pure, it's one of our competing (if not really existent) ideologies, and it's damaging where it's (read the allowance of corporate monopolies and control of gov't) realized most fully.

2) socialism, like other -isms and -ianities is many things, but it's a stretch to call the direction we've been moving across the last 30 years socialist in any pure sense. Even w/the nationalization of the banks that seems to be happening, you don't have anything akin to traditional socialist (broadly) wealth distributing ideals. I'm a proponent of really good ideas under any moniker, and socialism as a pragmatic means to the end of social justice where it works.