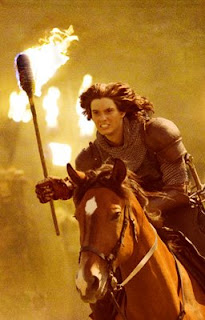 Being a youth minister, I get all kinds of crap in my email and snail mail about these religious movies that the corporations want churches to promote. I usually resist, but this weekend I caved and took the group to see Prince Caspian. What a crock! Don't get me wrong, the movie was pretty good, but here's the story line: good Narnians get in a big fight with bad humans, and lots of people kill each other in fight scenes that can't decide whether they're trying to be graphic or funny. After a few beheadings and humorous murders performed by mice, the Jesus figure (Aslan) comes and kills all the bad (Spaniard?) humans for the Narnians. Thanks Disney for a helpful and nuanced Christian allegory! I'm glad you got my dollars and the dollars of countless other youth group teens around the country. Now I have to figure out how to communicate the idea that Christianity really isn't a crusader religion.

(In an interesting side note, the opening scene to the movie was filmed at Cathedral Cove in the Catlins in New Zealand. I saw it and immediately said "Hey, I know where that is"! You South Island Kiwis will undoubtedly know the spot as well.)
Email Post

Unknown said…
Ha! Fun fact that I just found out. There are two such "Cathedral" places in NZ. The Cathedral Caves are in the Catlins, and Cathedral Cove is on the Coromandel Peninsula. I was wrong about the filming location, but close on the name...
May 20, 2008 at 5:13 PM