Well, I've just returned from this week's Urban Camino (a new term I've come up with, even more pretentious than "urban hike"!) I have to admit that I liked it more than expected. Walking really is the way to travel if you've got the time for it. You really don't get a good spacial conception of an area until you've walked it. It turns out that Fremont isn't actually a half-hour drive away--it's a one hour and fifteen minute walk, and there's a lot that lies between here and there. 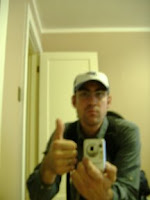 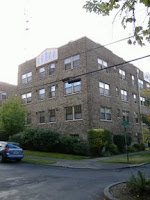 I started out at our place on a relatively grey day--like most days in Seattle this time of year, the sky looked mildly threatening, but mostly harmless. I took my raincoat, but didn't use it. 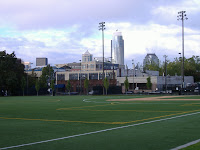 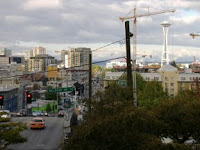 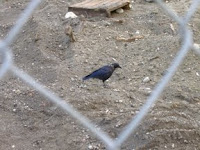 I started out in a bit of a negative mood. I usually do in the morning. The city looked generally dirty and gritty to me--the closest thing to "natural" being these offensive ravens wallowing in construction debris looking for filth to eat and then regurgitate, (or so I assume).

It took me about a half hour to walk to Lake Union though, and by that time I was starting to get into the rhythm of the walk. Walking for me is something of a spiritual discipline, because the rhythm of the movement puts me in a reflective mood. It helps to have an attractive location to walk in, but I was surprised to find that the distraction of the city became a sort of white noise relatively quickly. The first half of my walk passed by quickly. 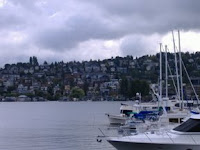 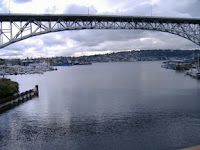 Within an hour I was crossing the bridge into Fremont--I'd expected it to take about two to get there, so I was surprised. Once again, the city comes into perspective spatially when you walk it. Driving distorts distance. 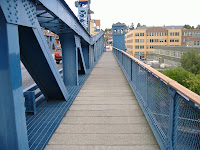 I found the Troll for the first time since I've been in Seattle. It's under a giant freeway underpass, and is a surprisingly large thing to find there--similar in scale to the Lincoln monument in Washington, if I remember it correctly. 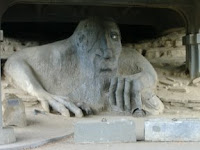 Because I had some extra time (I'd alotted 3 hours for the walk), I looped around to Fremont's mildly terrifying Lenin statue, which they "rescued" from some post-Communist Eastern European country, again, if I remember correctly. Seattle's quirky liberals have really "taken the power" out of Lenin's evil, because they decorate him like a Christmas tree for the holidays. Is this not distasteful? 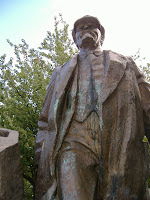 No real epiphanies today, but I did come across this interesting little bit of preserved railway, turned into a garden in front of a houseboat community. 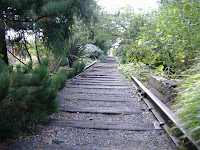 I've got two versions of Pete Seeger's "John Henry" on my iPod, and couldn't help think here that John Henry's battle was a losing one--ultimately, machine has triumphed over man. Exhibit A--travel is mechanical, to the extent that it feels like cultural rebellion to walk the city on a business day, during rush hour. Walking still feels like the most human way to travel. Not that I'm giving my car up anytime soon.
At the conclusion of my walk, I followed a trail through next year's winner of the "World's Most Unpleasant Park" Award: Seattle's brand new, ill-concieved monument to liberal humanism, the "I-5 Colonnade"! 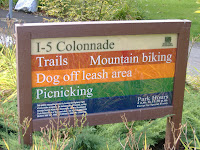 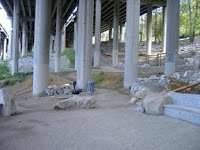 "Come on kids! Lets go down under the interstate! We can have a picnic (don't forget to brush the syringes off of the table!), and we can let Rover run free in the giant gravel crap-box! Bring your bikes, there's a new trail that swoops dangerously close to some giant concrete pillars!" Not surprisingly, no one else was there. Crowds usually don't show up until 11-12 in the evening. The city is trying to make this place more livable, but really, whose idea was this?
In the end, it was a good experience to begin to walk through the city that I've begun to call home. I still don't feel a strong connection with the place, but it has it's charms. I've always liked dorky quirkiness, and Fremont's pretty much the city's center for that. Capitalism and corporate greed continually smack you in the face as you walk past endless rows of advertisements, but you also see lots of little glimpses of humanity. Seattleites--and particularly Fremontonians--are great about weaving art and nature into the life of the city, so it's hard to forget here that the city can express some of the best of that humanity has to offer along with some of the worst.
Email Post
Labels: Blog Walking Seattle Living Travels

Anonymous said…
I really miss walking to work. Not only is it the ultimate way to travel, but its a counter-cultural statement...uh, right.

Anonymous said…
what a refreshing, back to basics afternoon spent cyberifically with Tim. Now I want to take a blog walk through QT to share with ya'll :)
October 1, 2007 at 11:42 PM