To Give Up or Not to Give Up

Of the 8 hours or so today that I spent putting bottles in boxes, at least 4 were spent considering whether or not Angel and I should leave the country. Actually, more specifically, they were spent thinking that we should just leave and move back to New Zealand. Part of New Zealand's draw of course is that it's filled with places like this: 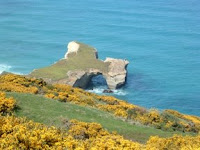 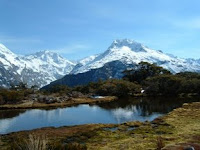 Let's face it though: there are lots of nice places all over the world, and the Pacific NW isn't half bad. It's not just about scenery.
The fact is, neither one of us likes living in the US. As all Americans well know, everyone else in the world would simply kill to live here, because it is indisputably the greatest nation on the planet, but it's just not doing it for me. I'm sick of the work culture--I've got two jobs and zero vacation time. Angel's got about three weeks (good union), but gets hassled every time she tries to actually use it (bad, but standard, employer). I'm sick of the materialism. I'm sick of the media--specifically the bizzare way that TV dominates so much of our common culture. I'm sick of our health care system. I'm sick of the religious environment. I'm sick of advertising. I'm sick of elitism. I'm sick of keeping up with so many Joneses. I'm sick of our condescending attitude towards other countries. I'm sick of our foreign policy. I'm sick of being encouraged to be afraid of everything. I'm sick of ignorant arrogance. I'm sick of loud people and loud conflicts. I don't want to deal with it anymore, and I don't want my kids to have to deal with it either. We can stay and try to help make positive contributions, but honestly America isn't going to be reformed in our lifetime, or in the lifetime of our children. It's a big ship to turn around.
Further, we loved living in NZ. There is no "work" culture--it's a vacation culture and an island time culture. We were both actually told by our employers that we needed to take our vacation time. There's less materialism--most everyone drives an old car and wears the same set of clothes 3 days of the week. The media there is less pervasive, and there's usually nothing on TV. They have universal health coverage. They don't have the same bizarre evangelicofundamentalist/conservative politics connection. They are as egalitarian a place as I've ever been. Their gov't keeps its nose out of others' business (for the most part, though there are a lot of Pacific Islanders who would dispute that.) They are self-conscious about their general lack of influence on the world stage. The people have a typical English reserve, combined with a distinctive Kiwi humility. On top of all of this, a lot of our best friends are there--more, actually, than we've got in Seattle. It's paradise for people like us. It really is. The only problem really is that they have cold houses, but we could invest in insulation.
Still though, it's just not that easy. Moving there, for one, would feel like giving up on America. There are 300 million others to pick up the slack, but still, I've got this sense of responsibility. It's also difficult to leave home. There are a lot of things I like about this country--the food, the sports, the landscape, the affordability of living, the history and the principles that "America" is supposed to stand for, the people I know. Really though, it all comes down to family. If our family wasn't here, we'd be gonzo. We want our kids to know their grandparents, and we don't want to disappoint our relatives by heading to the opposite side of the world. Neither family has the means to travel frequently, and inevitably we'd be cut off from them significantly.
Still, the decision isn't made. One thing that we've realized is that in the US, we have much less time to take vacations, so it's actually difficult to keep up with family just living in a different state. There's very little chance that we'll move back to the Midwest (even though we're not ruling anything out completely), so it's likely that we're going to be pretty well cut off no matter what. In New Zealand, we'd have a month off yearly, and it's not that expensive to get back here. A month every couple years is probably about as much time as the kids (currently non-existent) would be able to have with extended family even if we stay in the US (or move to Canada, which actually is another real option. BC is fantastic!) . I've realized that when you start travelling, you essentially have to give up on ever being completely happy where you are.
Email Post
Labels: Travels

Douglass said…
tim mathis. whats going on buddy? its me, jon douglass, from that asbury place you like to talk about so much. in a roundabout way i found your blog and thought i would say hello.
funny, i have thought a lot about some of the same things that you have mentioned in regards to the idea of christian colleges in general and my personal experiences at Asbury, and recently as I attended and graduated from Asbury Seminary. Like you, i have mixed emotions about numerous things, and won't go into specific detail here, but one thing i have certainly realized post-Asbury is that the world is a big place with lots of people and lots of differing viewpoints. was i prepared to face these things? on some levels yes, on others, no. i guess what i am trying to say is that i can see what you are saying and in many ways i agree with your assessment.

As far as wanting to move out of the country...i'll have to be honest and say that i don't know how things are anywhere else in the world other than what i read or see, and its getting harder and harder to trust those things. i've never lived anywhere esle except the US and so my opinion is somewhat biased. i think there are though some good and positive things about the US, but there are also some really REDONKULOUS things as well.
good to read your thoughts man, and you can e-mail me sometime or whatever if you want and we can chat it up like little schoolgirls.
my e-mail is jon_douglass@yahoo.com.

Anonymous said…
Expound more upon the contrasting work/play atmosphere between the u.s. and nz.
The cycle of "getting and spending" is pretty universal anywhere free exchange is allowed. I determined long ago that I wouldnt let that cycle tie me up like so many other americans. You obviously have done the same. So I'm guessing NZ is really just an easier place to live your lifestyle?

If you do stay in Seattle, I really suggest you apply for a position at Whole Foods. You have two locations there. I think you'd be much happier even if it isnt your thing (like stacking bottles is?)--you'll be around people that care about you and your life outside of work, and the scheduling is incredibly flexible. Plus, they're very concerned with social responsibility, and even compensate you for any voluntary community service done outside of work. Really amazing company, with diverse people. Check it out even if you dont want to work there. (I just finished my first training day and start next tuesday! I've never been excited about a job)

Unknown said…
Good to hear from you Jon! I'll have to drop you a line sometime. I'd like to hear about your experience of the college vs. the Seminary. The seminary always came off as less nannyish, and it's really a different sort of entity. I'd like to hear what you're up to now as well.
August 28, 2007 at 7:15 PM

Unknown said…
Wes, the cliche is that in the US you live to work, and in NZ you work to live. The reality behind that is that there's generally a less urgent feel about just about everything there (somewhat like the US South). Islands and backwaters in general always seem to feel a bit more relaxed, and NZ is both. You hear the phrase "She'll be 'right" all the time, which expresses the attitude--"whatever, things will be okay".

Socially this plays out in several ways: They have longer mandatory vacation time (I had three weeks paid at my quarter time job, and that's standard) and more holidays. I think that was brought about by strong unions, as well as a social philosophy similar to France's, that you can alleviate unemployment by allowing workers less hours. They value vacation time though, and it's really visible. They're some of the best travellers in the world, and a year long OE (overseas experience) is pretty standard for middle class folks either before or after college. Part of being in a small country that no one has heard of is a sense that the things that you're doing really aren't that important, so you can relax. Here in the US (or, I should say, big city US Seattle), there's just a sense that everything you do is extremely important--do or die! There it's like, ah, who cares. People in the US and Europe will take care of the important decisions. We'll just relax. There's a national inferiority complex there, but that's generally endearing, if sometimes annoying and contagious.

It's generally a low stress culture as well. They have universalized health access, of course, which alleviates a lot of major stressors for the young, the old, and the poor. They also have a relatively even distribution of wealth, so there's not as much of a visible underclass (or upperclass). Racial conflicts are there, but they haven't been as intense as they have here or Australia (or really, anywhere that was colonized). There are still social problems, but they've generally built a well-functioning society.

I really think that the role that corporations play in the two societies has something to do with the difference in the "getting and spending" cycle--advertising is just so pervasive and inescapable here that it's difficult to avoid the feeling that you need to get something at almost all times. It's just less visible there, and they have relatively strong restrictions on where and when companies can place advertisements. Like a lot of islands, they're also self-consciously thrifty , so the US propensity towards excess and waste doesn't translate. Get what you need, and relax.

In general, in my experience, the country's organization just came off as really sensible, where our country's organization comes off as senseless on so many different levels. It's amazing how backwards the US--both culturally and governmentally--is in a lot of ways, and how blind so many citizens are to that backwardness. NZ's not the only alternative, but it is extremely attractive in our situation.
August 28, 2007 at 7:44 PM