Woody Guthrie, Lady Gaga, and the spirit of "A Little Runny" 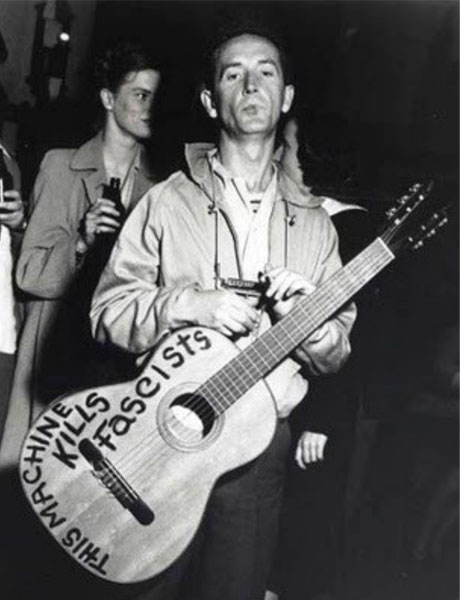 The loss of a parent destabilizes you, and makes you question who you are. After my Dad died last year I spent a lot of time literally wandering - on the PCT, then in South America, then in the American West, and most recently in Mexico. And during that time, I've also been wandering figuratively - thinking about the big, cliche, crucial questions like how to live a meaningful life, and whether it's possible to be happy, to make a difference, to eventually die at peace with who you've been.

In that process, wilderness, and particularly the wilderness of the American west, has always felt important: grounding, contextualizing, and giving me a sense of my home in a universe that's beautiful, terrible, and gigantic.

And travel has always felt important (if not comfortable): eye opening, educating, and giving me a sense of my place in a human project that's beautiful, terrible, and gigantic.

But as someone who grew up intensely religious, but now doesn't see myself as an active participant in any religious tradition, the part of me that wants a sense of connection with history and a purpose within it has been flailing.

In part, that's what has driven my personal shift towards political engagement. There's a visceral sense that something historically important is happening in the US right now (even if it isn't clear what that is), and I want to participate in it as a positive actor - to be "on the right side of history", as they say. But it's been hard to figure out how I fit in - what my role should be in the larger political struggle of the present moment.

Activism in the tradition of Woody Guthrie

Before the Superbowl halftime show last night, there was a lot of speculation about whether Lady Gaga, the performer, would make a political statement. (Infowars also speculated that she would perform a Satanic ritual, but that didn't seem to pan out.) She didn't, overtly, in the sense that she didn't scream "Dump Trump" or display protest signs during her stage show. But along with "Born this Way" being the centerpiece of the performance, a lot of observers believe she made a veiled reference towards #resistance by opening with a montage that included a portion of "This Land is Your Land" by Woody Guthrie: a vanilla American classic, but also a protest song very much in the populist tradition of anti-authoritarian resistance.

I'll get back to that song in a little bit, but for now I'll thank Lady Gaga, because in Woody Guthrie I think I've found my connection to American tradition, and a natural muse for this ongoing writing project.

Let's start by being clear that I'm no Woody Guthrie.

But I can identify with him. Guthrie was a white dude born in a small town in the Midwest (Oklahoma to my Ohio), and spent much of his life traveling in the US, and internationally: first looking for work in California during the Dust Bowl era, then as a musician. He latched on to early mentors who were African American (possibly as a rejection of the racism that he saw in his youth - his father was a member of the KKK and participated in a lynching that Woody witnessed. This is nothing like my father, BTW), and through his life frequently used his art to tell stories about people crushed in the gears of the American machine: the working class, African-Americans, deported Mexican immigrants. He was inspired by the American landscape, spent a part of his life writing songs about the natural beauty of the Pacific Northwest, and performed with a guitar labelled "This Machine Kills Fascists".

Not incidentally, he was perhaps the original protester against Trumpism, and wrote anti-racist protest music directed at the Donald's father, Frederick Christ Trump, while living in one of his (segregated) apartment complexes in New York:

As a populist white dude who, at heart, just wants to spend my life doing my job, traveling, playing outside, or writing about injustice, you can see how I'd identify. In a country where white people need to find models of those from their own culture fighting the right battles, you can see why he's important.

Guthrie had a militant activist streak (see Tear the Fascist Down), but "This Land is Your Land" was a spiritual, hopeful, and defiant attempt to communicate the heart of what it means to be American. The song's opening verses are famous as a celebration of the beauty of the country:


This land is your land. This land is my land. From California to the New York island; From the red wood forest to the Gulf Stream waters: This land was made for you and Me.

When the sun came shining, and I was strolling, And the wheat fields waving and the dust clouds rolling, As the fog was lifting a voice was chanting: This land was made for you and me.

Personally, I've known that America is beautiful my whole life, but through trail running, and particularly through hiking the PCT in 2015, I've developed a sense of connection to the physical terrain; a sense that my spiritual identity is bound up in the landscape that Guthrie describes, versus just an appreciation that it's full of beautiful things to look at.

But the second half of the song, which was less recorded and is less frequently sung in elementary schools, can't easily be taken as a hymn of praise. It's more a defiant commitment to solidarity, the poor, and to freedom, as the heart of American identity. In short, it's a protest song:

As I went walking I saw a sign there, and on the sign it said "No Trespassing." But on the other side it didn't say nothing, That side was made for you and me.

In the shadow of the steeple I saw my people. By the relief office I seen my people; As they stood there hungry, I stood there asking: Is this land made for you and me?

In the full spirit of "This Land is Your Land", then, I've found an expression of what I hope my blabbering here can be. My sense of commitment to writing at the moment is driven both by a love for the physical America and actual Americans, and the sense that this is my home, as well as anger at the systems and leaders that threaten both the landscape and the people. I want to be able to, in spirit, thread the needle between hymn and protest, and between supporting the people and changing the system.

Again, let's be honest, I'm no Woody Guthrie. My readership on a good day is in the hundreds, and I'm basically an amateur hack writing for my friends. But it feels important to find myself in the same spirit, and the same tradition. At a time when it feels like we're being intentionally pitted against each other, and when "American" is being rebranded as "authoritarian" it feels important to have a quintessential American tradition (white guys trying to stand beside black people, brown people, immigrants, women, and the rest in the struggle to achieve a just society) that I can incorporate myself into. It feels like a step in the right direction, and an insight into the way that my community (of readers, of outdoors-people, of populists) might fit in to all of this in a way that's productive. Guthrie represents the insistence that it is American tradition (and the best part of white American tradition) to establish Black Power, to protect the illegal immigrant, to protect - even enshrine - the landscape, and to protect the working class against the machines of white power and authoritarianism. Among other things, this is America.

This isn't Guthrie, and it's not the full lyrics, but this is my personal favorite version of "This Land is Your Land" (bonus points because it's also peak Springsteen):