My friend's redneck gun-nut dad was right about the Hispanics. 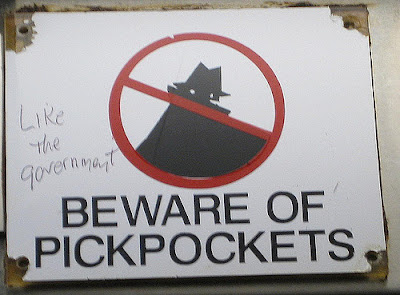 In 1998, when I was 18, I took my first real trip outside of the country (excluding a taxi ride around Nassau on a Disney cruise when I was a kid), on a mission trip with my evangelical church to Lima, Peru. We spent most of our time there in the barrios, volunteered at a leper colony (for real, those exist still) and a school for the deaf, and performed in a misguided clown show that, predictably enough, terrified neighborhood children to the extent that we called it off early.

One of the leaders on the trip was my friend's dad, a redneck gun-nut in the classic sense. He lived in a country lot off of a back road near Ohio's smallest incorporated village, where he homeschooled his kids and had a literal concrete bunker in the back yard. He had a full gun locker that we used to raid for weekend entertainment, and my friends and I went on a month-long kick where we blew up propane tanks on their property (his idea) until police helicopters started patrolling his house and he made us stop.

I know those paragraphs beg for more description, but additional details aren't actually important here: just one quick story about a quote from said gun-nut that has stuck with me for years.

While we were surrounded by third world poverty of the type that most of us had never seen before, the topic of crime - and particularly the prevalence of pickpockets in the city - came up. He made the comment that, when poor people steal from rich people, it isn't necessarily because they're immoral: it's because they have families and no money, and don't have any other good option. (With the takeaway that people who have enough should give freely to those who don't so they don't feel forced into immoral decisions like stealing.)

To be clear - this guy wasn't some kind of secret lefty who just happened to like country living. He was (and I'm guessing still is) a genuine Second Amendment, keep the Federal Government out of our business and let the church handle it conservative.

And to be clear, he recognized something important and true about the nature of poverty.

It's something I thought of in February of this year in Guatemala, when I was back in Latin America for the first time since the mission trip, and had an extended conversation with a guy who had previously worked illegally in the United States. The details of his story were fascinating (and I might write about them later here), but the general outline was that a few years prior, he had spent every dime he had to pay coyotes to help get him through Mexico on a trip where he risked his life multiple times, in order to get to the US and work as a gardener for $20 an hour. He did it, not because he was immoral, but because he had a family, and didn't have options for work in his hometown. And after he'd done the work for two years in the US, he came back to Guatemala and built his kids houses so they wouldn't have to go through the same thing. He didn't plan on leaving his home again, and he didn't want to steal anything from Americans - he just wanted his kids to have a better life, just like my redneck youth leader had suspected.

When they sent their people, at least in this case, Guatemala was sending their best.

It's not about excusing racism - it's about avoiding more scapegoating and keeping faith in the right people.

The reason that I tell this story isn't to argue that rural whites aren't racist or xenophobic. To be clear, I think it is legitimate to critique progressive thinkers who, in the effort to speak to and empathize with the white rural working class (as if that were a simple monolithic group), have downplayed the role that racism (and other types of xenophobia) plays in American culture as evidenced by our most recent election cycle. I personally don't have any interest in changing that narrative. I think xenophobia/bigotry/racism needs to be identified and addressed openly rather than denied or glossed over, and that it is and always has been a dominant undercurrent in our culture.


The reason I tell the story is that it helps me to remember 3 things:

1) Different political and religious ideals do not necessarily equate to a differently functioning moral compass. To the conservatives/Trump voters/redneck friends who might be reading this, I want you to know that a reason I keep writing is because I believe in you as good people, even if I disagree with you on some fundamental points, and I think that we both want what's best for each other.

2) Those who are desperate and feel vulnerable are more likely to compromise their stated moral principles by throwing their neighbors under the bus. That's true of thievery, and it is true of support for xenophobic politicians who promise to help them out of a mess. (Again - this is not morally excusable but it is predictable.)

3) There is a powerful instinct to scapegoat the working poor, the uneducated, and the disenfranchised of any stripe, and this takes the focus off of the politicians, marketers, and corporatists that are intentionally working to manipulate them. I think this year that America bought a lemon, but building a better society always requires us to remember that (whatever their issues) it isn't the guy who buys the lemon who is most at fault, but the guy who sells it.

It is in everyone's best interest to create a situation where fewer people are vulnerable economically and socially because as a world this will mean fewer pickpockets and racists (metaphorically and in reality). At the moment vulnerable people in America can find plenty of legitimate reasons to question whether the highest leadership of either political party is seriously committed to this project. The next four years, I'm fully confident, will reinforce that feeling bigly. So bigly you won't even believe it.

But even if it's a flawed tool, government is inevitable and necessary as the most powerful tool we have to try to create a more just society. And if we're going to have to have a government, we might as well try to make it a decent one.

Both Trump and Bernie tapped into a populist instinct that gets at least some of its energy from anger created by economic and social injustice. The perception that the rich and powerful aren't concerned about the poor and powerless is the energy behind every citizens revolution. And so political leadership that can restore some level of trust and stability will be leadership that is actually committed to leveling the playing field in society.

If there's hope for America, it's that much (if not all) of the anger that drove the Trump movement was righteous anger (even if directed towards the wrong people and the wrong solution). If there's hope for either political party - or better yet, for society itself - it's that we can locate leaders - at the local, state, and federal levels - that can channel that anger towards change that will be meaningful for people who are vulnerable (and can communicate their vision in a way that sells). I have a feeling that in the next few years, the actions of those who are well-intentioned will be particularly visible in stark relief to the actions of those who aren't.