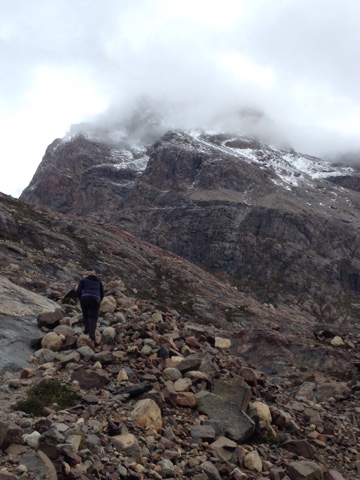 It maybe doesn't feel as intense and exotic as the phrase implies - at least in the popular spots at Torres del Paine and Fitz Roy. Patagonia isn't a secret spot, and even in the off season these were some of the busiest trails I've ever been on. We managed to find a few spots on the back side of Fitz Roy that we had to ourselves, but in general trekking here was definitely social.
And it also hasn't been exactly rugged. Actually it's kind of fancy and expensive. At Torres you can get coffee and food at refugios along the way most days, and at Fitz Roy town was never more than a day's walk away. Patagonia is by far the most expensive place we've been in Latin America (although still a bit cheaper than most of the U.S. or Canada). So the experience had more in common with the Camino or New Zealand Great Walks than an American back country wilderness experience.
Not that we were opposed to that, especially in the currently frosty weather. There's a reason so many people come here from around the world, and it is one of the most dramatic landscapes I've personally ever seen - with mostly rolling treeless hills punctuated by compact but towering ranges of sawtooth mountains at regular intervals, the largest collection of glaciers in the world outside of Antarctica, and unusual wildlife populations, where Pumas and Guanacos (aggressive, thin and attractive llamas) are doing quite well for themselves. El Chalten, in Los Glacieres National Park, has to be among the most beautifully situated towns in the world, with the base of Fitz Roy a 10k day hike from the center of town, and glaciers calving off a few miles away to provide the town water supply.
And if one wants, it is easy enough to get into real deep wilderness here. It's sparsely populated and still feels like a frontier in ways. Occasional sheep farms are the extent of civilization that the exists for hundreds of miles in the countryside. And it feels undeniably exotic here, but with well developed infrastructure to get around. It's not a competition, but Patagonia is up there with the prettiest places in the world.
We're trying to learn as much Spanish as possible here, but South America is too beautiful to lend itself to serious study. I'm writing from the bus at the start of our trip back up to Sucre, Bolivia (by way of Argentina and Chile) to take a few more weeks of classes before heading back to the U.S. We'll see how things go there - unfortunately I think it is also supposed to be amazing.
Email Post