Lazy Musings from a Hammock in El Salvador 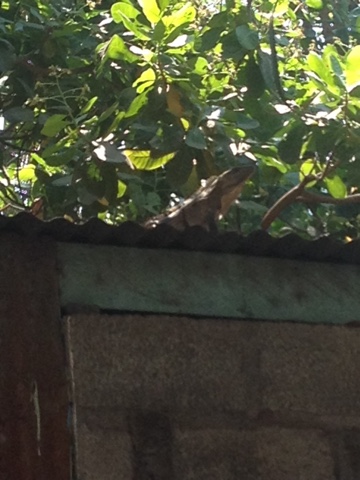 A Feral Iguana!
Today we spent the morning on a short run, then playing in the waves for a few hours. Then coffee, $1 papusas, and laying in a hammock. More serious athletes would have gone surfing, but the waves are almost too big to even swim in, let alone try to surf for absolute beginners. Camping is $5/night per person, and it would be possible to eat on about $10 - 15/day. So, if you camp, don't eat out much, don't travel, and don't have other expenses, on a nice beach in El Salvador one could realistically live for around $500/month.
Which is a roundabout way of getting to the point that Central America would be an easy place to get absorbed into for a long period of time, if you either love surfing or laying around. It's really beautiful here in El Tunco, safe and relaxed. It, like Lake Atitlan, would be a good place to finish that manuscript or contemplate that big life change.
Angel and I, to be honest, aren't great at either surfing or laying around, and don't have any major manuscripts in the works, so while we can appreciate the lifestyle for a few days, it's probably better that we're moving on relatively quickly - catching a bus to the port of La Union tomorrow, then Nicaragua on Friday. Then on through by bus over a couple of days to Costa Rica to meet our friends from CO, Annie and Jeason Murphy. Should be a fun time in the jungle!
Some thoughts:
I'm glad the PCT taught us to appreciate the small luxuries like a clear sky, an available shower and warm food. If you are happy with that, it's cheap to travel. If not, it would be possible to blow a ton of money pretty much anywhere.
The economics of travel are interesting to immerse yourself in. Unemployment in C.A., for instance, is way cheaper than unemployment in the U.S. If you're waiting on seasonal labor, or have a period off between jobs, it makes good financial sense to fly to Lake Atitlan, rather than squandering your time and money in Cleveland or Tacoma. You can even take Spanish classes and still pay less than you would for rent on a one bedroom in a lot of American cities. Flights are only a couple hundred dollars. You know you want to do it.
But while you're there, stay and shop mainly with the locals. They need the money more than the guy who runs the party hostel or the Irish Pub. Plus they're usually more interesting.
C.A. travelers are similar to travelers every where. C.A. residents are similar to people everywhere (except Vegas, where the body snatchers have colonized). When you are a traveler, it is difficult to blame a person for sneaking into a country like the U.S., when their families barely get by with the essentials, and every day they see Westerners laying in hammocks finishing manuscripts for months at a time. And when they have few to no other good options for real improvement in their economic situation. When people immigrate and have no problem finding work, their peers will also immigrate. If the wealthy country would do something as simple as grant temporary work visas for seasonal, agricultural, and construction labor, my guess is that people would generally stop going illegally. (And the farms would have their labor without threat of fines. And the U.S. would know who is in the country and why...) It is much more expensive to pay a coyote than to buy a plane ticket and apply for a visa. The work is there. Who loses if we let people do it legally? When the work isn't there, people won't come.
Now that I have that off of my chest, I will conclude by saying that the beach is nice, but we are definitely mountain people. We need cool weather and a pretty view to climb to in order to feel normal. I'm already looking forward to Patagonia and the Andes!
Also, friends, don't elect any lunatics while we're gone.
Email Post