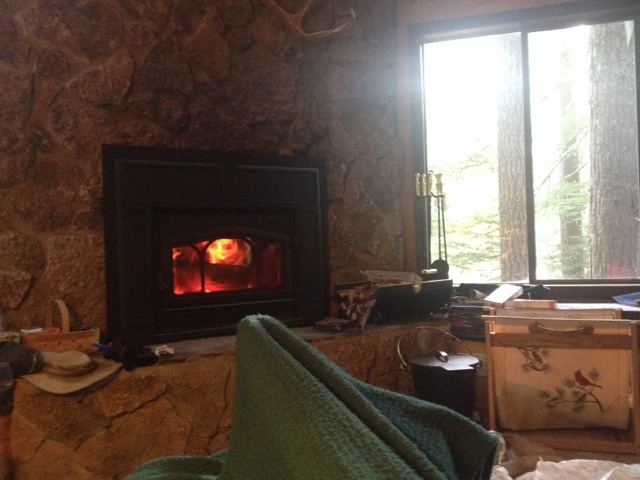 This week, as PNWers know, has afforded us some genuinely crappy weather, with mountain temperatures in the 30s and 40s, and steady rain for days on end. With wet gear and ominous weather forecast for Friday, we rolled into the Ollalie Lake store yesterday contemplating a stop in their cabins for our first zero since getting back on trail on the 24th and a few nights of relief. The only problem? Labor Day weekend and a fully booked resort (really just a few cabins and yurts). The hitching prospects looked grim as the resort is among the most remote on the trail, 50 miles of dirt road from the nearest highway. It was raining, and there was only one non-hiker customer there. He was going the other direction.
And then, the trail provided us with a devil's wager: an old man pulled up in an SUV and began asking directions to Highway 26 - the closest major road and the sight of a cabin that our friend Ben Mayberry had recently offered to let us hole up in when we passed through. The cabin was 40 trail miles from the Ollalie Lake Store, but just a few miles from where the trail crosses highway 26 south of Timberline Lodge. While we didn't voice it, it was clear that taking the hitch would likely mean making our first egregious skip. No similar ride back would likely materialize. It would also mean a night or two sitting in front of a warm fire eating constantly and drying out our gear.
It may be needless to say, but I'm posting from a comfy chair in front of The Mayberry's fireplace. Our ride, Phil DeLany, was a nice old WTA volunteer who was really interested in the PCT and was more than happy to transport us door to door. We took the opportunity as providence and a clear example of the trail providing. Tomorrow we'll do an out and back hike and write off the 30ish miles we miss as our first egregious skip (we've hitched around a few fires already so we can't claim a pure through hike, but this is our first 'screw it' skip.)
Before we got to the cabin we bought a bunch of food at a local gas station, and carried it about a half mile to the place. For a few minutes we thought the trail was going to punish us for our disloyalty because the instructions to get in the cabin weren't working, and Angel's phone died immediately upon arrival. Ben is the kind of guy who at any time might be out on a month long trek in the wilderness anyway. We were envisioning pitching our wet tent on the cabin lawn, eating cold bratwurst for dinner and wallowing in shame, regretting our decision to take the hitch.
But nope, fortune again smiled upon us. We found a functioning outside outlet, charged the phone, got through to Ben, and stepped into a hikers dream world of food, laundry, hot drinks, a cozy fire, and even great reading material: a rare book about Canada's Great Divide Trail, which we've been talking about through the whole hike, was among the first things I noticed when we arrived.
We likely skipped a lovely section, and it's fairly possible that we'll come back for this one later: it's close to home and relatively uncomplicated logistically.
But maybe we'll just embrace it as the universe giving us an amazing hook up. I do think it means that we have to eventually go through with those plans to do the Great Divide though.
Email Post

Tiffany H said…
The world has forgiven you for your "egregious skip" lol. So funny that you are naming it that. Well deserved if you ask me!!
September 10, 2015 at 9:40 AM

Unknown said…
Dont beat yourself up. Just glad everything work out for you guys. Stay warm and dry please!! It def feels like fall now.
September 15, 2015 at 3:03 PM