There are more burgers here than I thought there would be.

I'd heard the PCT described as a series of week-long hikes with resupplies in between, but so far we've been in civilization about every two days.  I'm not complaining about that at all, because there are burgers in civilization.  Since we left Warner Springs, our week has looked like:

Day 1: hike up hill for a while on a beautiful day.  A bit grumpy b/c the pack hurt.  Happen upon a trail angel's house (Mike Herrera) just as we were planning to finish.  Get handed smoked chicken, watermelon and a bunch of cookies.  Feel a lot happier.

Day 2: hike to a nice spring on a too hot day.  Sit around for a few hours.  Hike some more to camp near these boulders, while pretending that there wasn't dirty toilet paper also camped out near the same boulders: 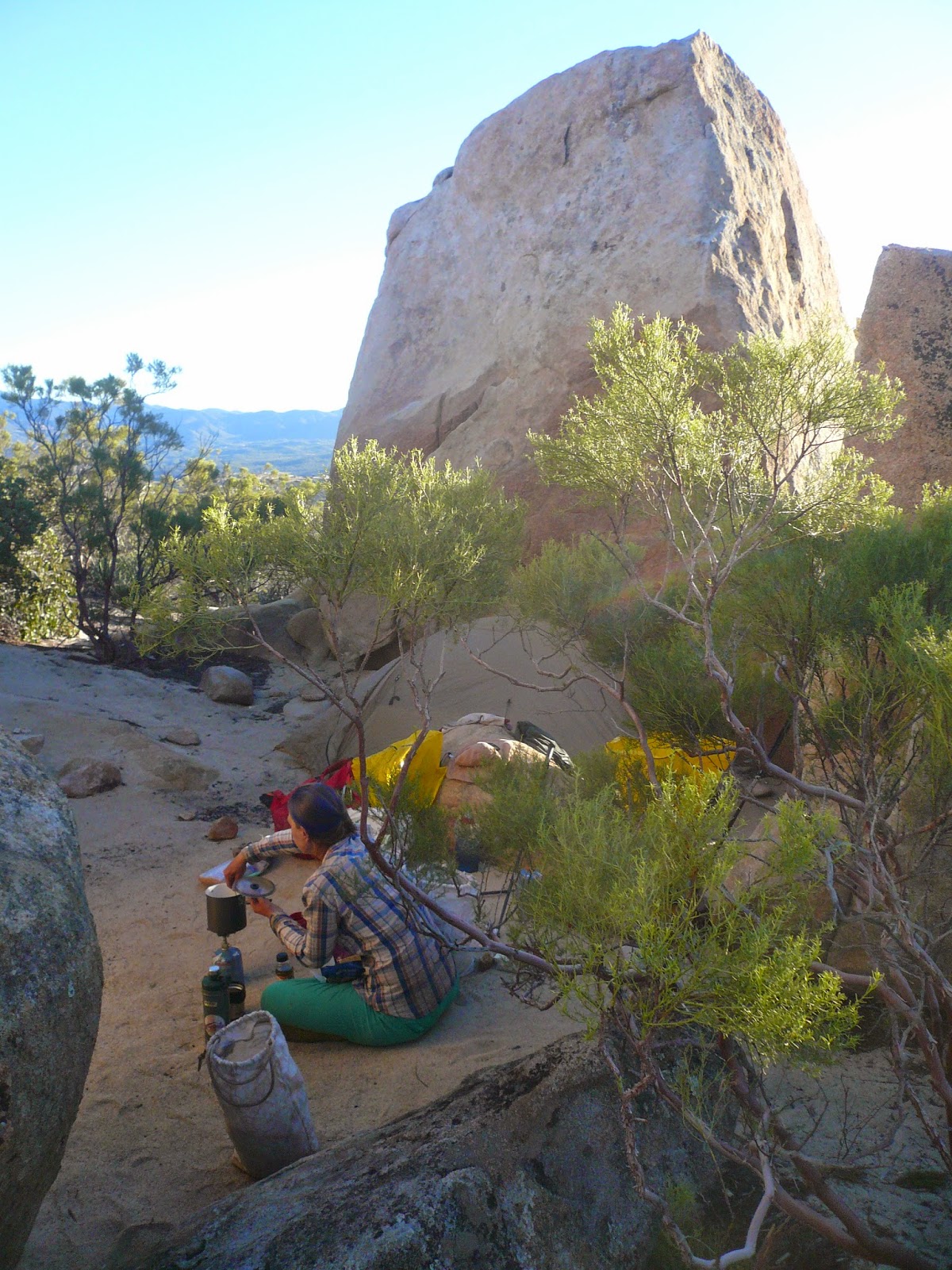 Day 3: Hike down to the Paradise Valley Cafe: about 11 miles.  Eat and drink way too much: about 4 hours. Hike about 7 miles ridiculously steep reroute to a camp site that was beautiful but deserted in a "I think I saw this place in a horror movie once" kind of way: about 4 more hours.

Day 4: hike down to Idyllwild, CA - clearly an old hippy town, at the base of San Jacinto mountain. Camp and shower and do laundry!

Day 5: Everything is free range in Idyllwild.  We're taking a zero day here and will leave tomorrow to climb Mt San Jacinto (tallest peak in SoCal I believe?).  A trail angel named Dave randomly pulled his car up when we were walking down the street and offered to take us to the trail head in the morning, so he'll be meeting us outside of the coffee shop!  Score!

We've had so much trail magic in the last few days, it's been amazing!  The scenery is still really nice - temperatures are increasing already, but the next stop is Palm Springs, where we hear it's already in the triple digits!  We'll be staying in a place with a pool there.  Hiking is hard!

We're right on our projected pace - a little bit ahead even b/c we're taking a zero today but should still get to Palm Springs a day earlier than expected, so will likely take two days off there.  Meeting lots of fun folks and starting to settle in to a rhythm: get up early and hike hard until lunch time, take an extended break, then hike again in the evening.  We should be able to get to Canada that way, but the breaks may well become less necessary once we get out of the heat of the desert.  So far so good!

It's been funny - we've run into just about everyone we knew was going to be on the trail: First it was Tim "IronHusk" - a guy I met on a run at Mailbox Peak a few months back.  Then Jess Soco - an ultrarunner with lots of mutual friends.  Then Michael Witte - Angel's former co-worker at Group Health.  Then today Gail Forshaw - another ultra runner who set the women's 60+ record at White River in 2012, at our first 50, and who Angel ran with for a long time during the race!  The PCT is apparently a smaller world than most!

We did make a few small readjustments in Idyllwild - I got a different pack with more of a frame (ultralite pack is great if you follow an ultralight philosophy, which I'm not really - it wasn't supportive enough and was putting tons of weight on my shoulders.), and Angel got new shoes - switched back to Salomon hiking shoes from boots she was in because her feet were hurting much more than normal.  All small problems really!

Hope all is well, and we miss everybody (and the temperate WA climate)!
Email Post

Bernie said…
It's not worth messing with your gear--shoes, pack, all of it. If it works, it works. I found that out the hard way. Also, be sure to get the pancakes at Whitney portal! Ginormously delicious.
May 1, 2015 at 10:37 PM