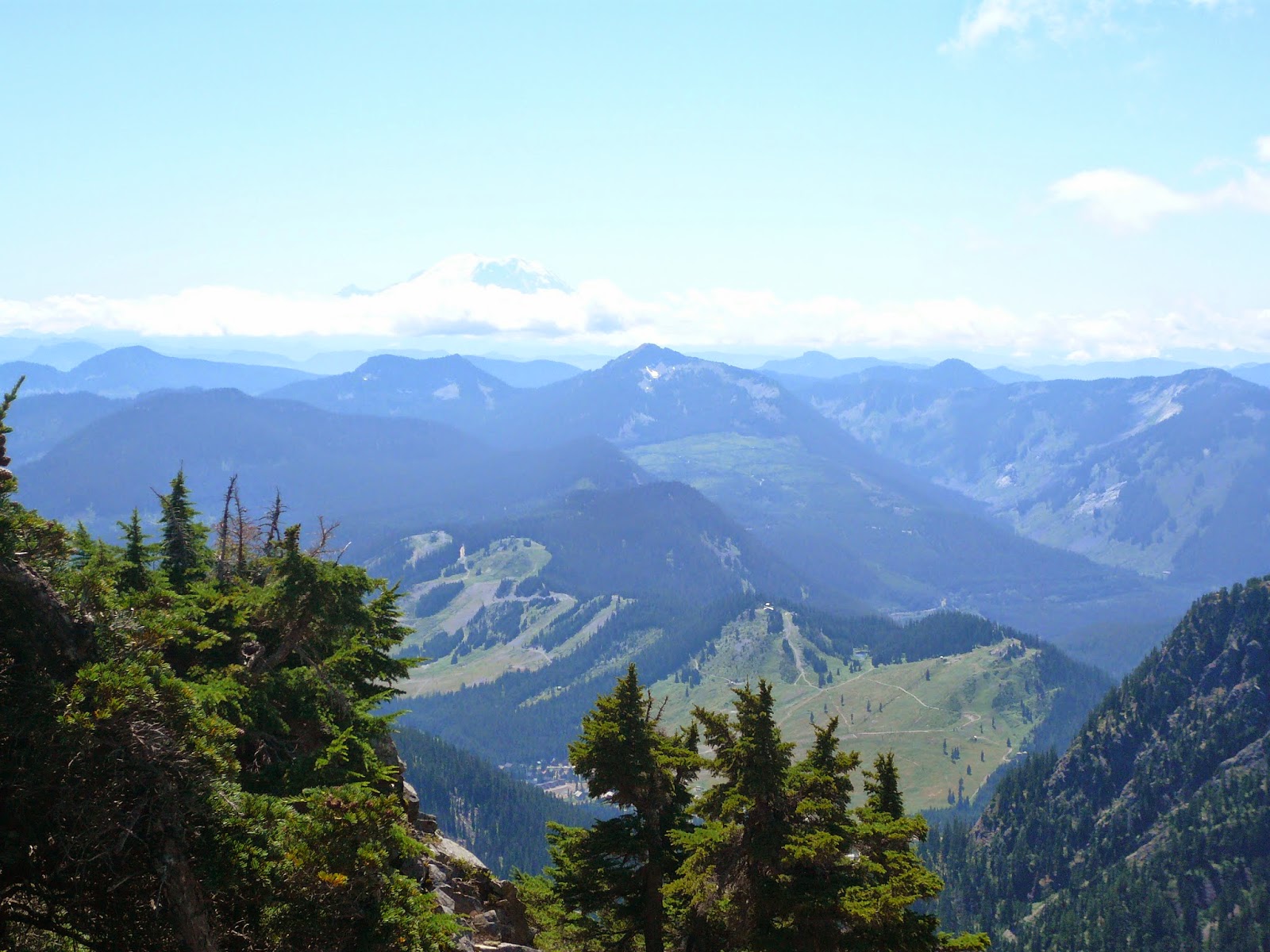 I started to write this post because I went on a great run/hike/scramble yesterday on Red Mountain, which I had problems finding information about online beforehand.  For some reason my Google search failed me, and I could only find one or two sketchy descriptions of the route.  Today I realized that there is an awesome description right here.

The trailhead is the PCT trailhead off of exit 52. Coming from Seattle, head left at the T off of the exit, then an immediate right - it's signed for the Pacific Crest Trail.  You need a National Forest Pass for the lot.

The trip is basically a 4 mile gradual uphill run followed by a half-mile, 1000 foot straight up scramble to the top of Red Mountain - a peak that I've wondered about climbing for a while, because it is conspicuous on the popular hike up to Kendall Katwalk.  The whole return trip took me right at 3.5 hours, moving at a relatively leisurely pace on the running portion, and then hanging out on the peak for about 15 minutes.

Routefinding is relatively straightforward.  Just go up the PCT for about 2.5 miles, and take a left on the big, visible and marked Commonwealth Basin Trail (it's the first trail off to the left that you'll come to, I believe.)    You'll descend for a bit before crossing a nice cool stream and a wilderness campsite, then ascend up Red Mountain for a mile or so (and a thousand feet or so of elevation) on well-maintained trail.  Once the trail levels out, you'll see a conspicuous trail off to the right which is marked with a cairn.  This is the route to the top.  (If you come to a pond, you've gone just a little too far.)  The summit trail isn't on the Greentrails map, but it starts close to where the main trail (Commonwealth Basin/1033) comes closest to the marked summit of Red Mountain.

(Pro/bandit tip: there is an alternate route that is shorter to the Commonwealth basin trail on the old Cascade Crest trail, now officially abandoned/unmaintained.  Just after the PCT trailhead parking lot, you'll see a "no horses" sign.  Just after it is a gravel trail off to the left, heading into overgrown bush.  Follow that until it dead ends into the Commonwealth Basin trail, and take a left. Don't know if it's any faster due to occasional overgrowth, but it's in good shape and I think takes about a mile of distance off the route.)


The route to the top changes from easily visible trail, to boot trail, to "it seems like there's no trail here so I'm just going to scramble the way that seems safest".  There does actually seem to be at least one route that is used consistently, but it's often hard to follow on the way up (it's more visible from above, so I didn't have any problems following on the way down).  When in doubt, I just scrambled up and looked for spots to switchback, and the route usually became visible.  I don't know much about climb ratings, but I've heard it rates as Class 2 or 3.  No ropes required, but you'll be clinging to the wall with hands and feet a lot of the time.  I was nervous at points, and even had to talk myself out of turning around at one point, but never felt genuinely unsafe.  As a thoroughly untrained climber, I'm not sure I'd do it in rain or snow though.  There were a fair number of big, loose rocks all the way up, so it's important to take time to be sure of your footing and hand-holds, even when you're grabbing on to big rocks.  (I also read in one of the reports that red rock usually indicates loose rock - at least in the Cascades - and there was definitely a lot of that.)  I thought a few times that it would be safer to do this with a partner in case anything happened, but you wouldn't want it to be a partner that you liked very much, in case you knocked loose rock down on them.

The summit offers amazing panoramas and quite a bit of room to spread out, sunbathe, have a picnic, etc.  Here are some sample pics of what you'll see: