Flew to Denver.  Instead of investigating veracity of Reptoid stories, read an entire book (Walking the Amazon by Ed Stafford) during an 8 hour layover. Flew to Durango.  In bed by midnight.  The book is recommended - great adventure.

Picked up by Deby Kumasaka at hotel, then picked up Wendy Wheeler-Jacobs and ate pizza.  Starting to feel a bit sick.  Met up with Softrockers in Silverton.  Heard story about wife hitchhiking across Colorado with Australian Lacrosse Team and naturist.  Prepped to get started running the Hardrock course the next day.  In bed by 10.

Got started with group at Ice Lake trailhead to join up with Hardrock course.  Nauseous and febrile in less than a mile.  Hitchhiked back to Silverton with a nice nurse from Maine.  Luckily caught friends James and Vivian before they headed out to crew the running group.  Spent day sleeping in the back of James' truck.  Vomited violently multiple times.  Didn't look or feel okay.  Paid for a hotel in Telluride (arranged by booking manager Alicia).  Vomited more.

Woke up feeling mostly well.  Tested stomach with giant breakfast burrito and coffee.  Both stayed down.  Sat down with some of the WA crew at Mobius Coffee and realized that Anna Frost - famous ultrarunner from Dunedin, NZ - was sitting at the same table.  When told I'd lived in Dunedin, she gave very Dunedin response of bemused "Why?".  Wandered the streets of Silverton.  Went to runners' briefing and events.  Volunteered to pace last 15 miles of race with random person I hadn't met - Tina Ure from CA.  Lunch with James to drown his sorrows in BBQ and beer after finding out he didn't make it off of the wait list.  Joined James to meet Softrock crew as they were finishing.  Ran from Maggie's Gulch to approximately Pole Creek aid station before meeting them (about 8 miles out/back).  Celebrated at Avalanche with pizza.

Up at 5 to watch the race start.  Breakfast, lunch, then drove to Ouray with Brian (Tina's BF and first pacer). Watched leaders come through.  Paid Adam Hewey's son to handcuff himself to strangers.  Apologized to Adam Hewey's wife for being a bad influence.  Cheered for friends running, including Jeason Murphy, who eventually finished in 16th after camping out for an hour waiting out a lightning storm.  Ate a Reuben.  Slept in the tent.

Up at 345 to go to start.  Watch Killian Jornet finishing, breaking the course record by 40 minutes.  Immediately begins joking, laughing, and gives 45 minute interview in multiple languages like he wasn't even tired.  Watch Julian Chorier finish in 2nd, hobbling, near death. Miss Adam Campbell finishing (eating breakfast).  Came in 3rd despite being hit by lightning.  Organize running pack.  Drive to Maggie's Gulch, then hike 4 miles uphill to wait to meet Tina.  Wait 4 hours, making friends with Aid Station volunteers, getting rained on, and eating food.  Take a nap.  Join Tina, who had some kind of significant knee injury, at 5:30.  Hike a lot of hills at altitude.  Go over 13k feet for the first time.  Enjoy the sunset.  Decide that running Hardrock is eventual life destiny. Talk to Dave Swoish at Cunningham AS and eat soup mixed with Mac and Cheese.  Try not to fall off of any cliffs and die.  Tina finishes her 4th Hardrock at 12:44 like it were no big deal, finishing as 4th woman.

Breakfast burritos at Avalanche Cafe because awards breakfast is a madhouse.  Watch awards presentation.  Lunch and goodbyes to most Softrockers. Group hugs. Decide to go for run up Boulder Mountain (part of James' former Epic 50k course) with Angel, James and Alicia.  Started by hopping a fence into a cemetery. Noted that first tombstone we saw was from a death on July 13th about 100 years ago.  Note the creepy coincidence that today is also July 13th.  Climb big mountain, hopping river, admiring spectacular scenery.  Over 13k feet again. Begin running downhill once we reach the top.  Note that there is, surprisingly, a giant goat with sharp horns running within arms' reach.  Scream profanity.  Group stops to scream, scare goat off. Goat continues to approach while group backs away slowly. Alicia attempts to develop plans to kill the goat.  Eventually group scares goat away by throwing rocks at it.  Group runs when given opportunity.  It is noted that the goat is once again in pursuit.  Rock throwing is repeated.  Goat continues to stalk group at a distance.  Group continues to throw rocks and retreat whenever goat approaches. Goat stalks group until they are able to retreat into the treeline, bushwhacking like lunatics several miles down the mountain.  Hop fence back into cemetery.  Make goat horror movie jokes.  Arrive back at camp after dark, noting that a man in fatigues is sleeping in the middle of the road a few feet from our tent.  Group notes that earlier he had been wandering around with a machete and screaming profanities.  Get in truck.  Truck won't start, just like in horror movies.  Walk into town to Montanya's distillery for food and drinks and good conversation.  More goat jokes.  Return to camp, where fatigue machete guy is still sleeping in road.  Advise Alicia to sleep in truck rather than in bivvy three feet from machete guy.  Go to sleep at about midnight, hoping not to die in sleep r/t goat or machete.

Pack up, then breakfast, which turns into brunch.  Get tickets for narrow gauge railroad trip back to Durango.  Finish packing, then visit famous Avon Hotel to pick up some of James' stuff. Ride old timey steam train to Durango.  Catch trolley to hotel.  Run back into town along old timey railroad tracks. Eat at Steamworks brewery.  Ride back to hotel on bus.  Girls are dancing.  Driver yells, accuses them of "smoking dope" when he smells a skunk.  Sleep.

Up at 5 for the flight home.  Dunkin Donuts in the Denver Airport.  Alicia sits next to person from Boulder on way to Squamish who hangs out w/Scott Jurek and knows a bunch of the ultra community.  Train/bus home from SeaTac. Lunch from the Co-op then take Alicia to her car.  Group hugs.

This was on the tail of our plane from Durango, with the note "Today you're flying with Dale": 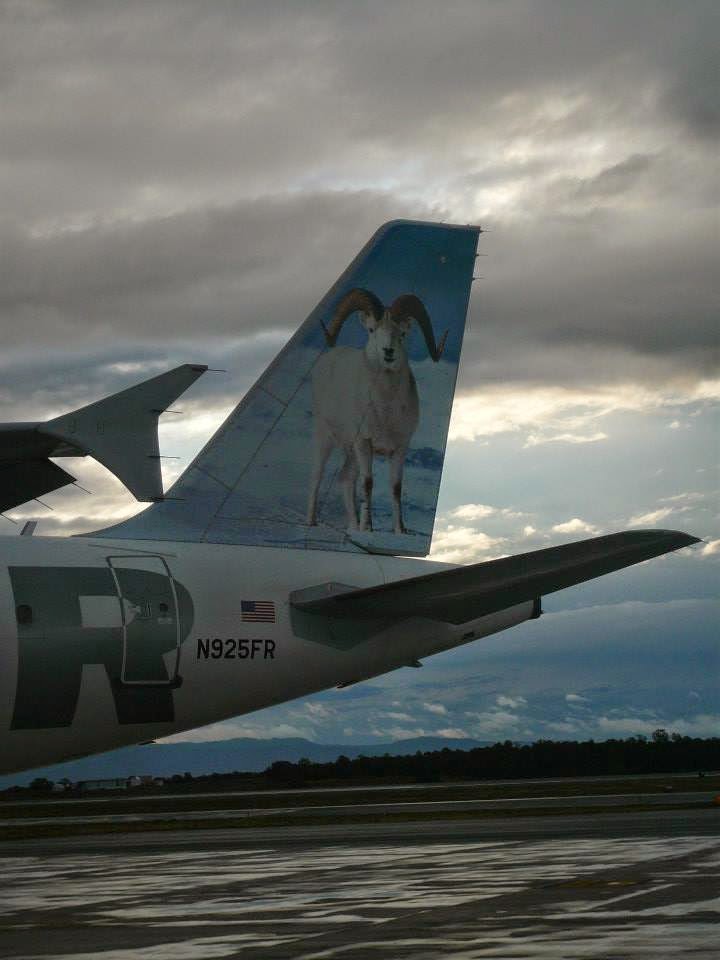 Martin Criminale said…
It sure was amazing seeing Kilian finish wasn't it? Like he had just wrapped up some little recovery run.
July 16, 2014 at 5:10 AM

Yitka said…
Spectacularly amazing write-up. And, I'm pleased to add, that while reading parts of this aloud to my boss here at the office this morning, a song about mountain goats came on over the local radio station.

Unknown said…
Haha - thanks Yitka - Dale is still out there stalking, somewhere. And Martin - yeah, it was totally crazy. He looked completely fresh, all out of proportion to the finishers coming in after him. His advice: "You just have to save your energy" for the finish.
July 16, 2014 at 9:10 AM