The High Divide Loop/Seven Lakes Basin in a Day: Making Sure Our Legs Still Work

Summer in the PNW is both too nice and too short to let weekends pass without getting outdoors, so despite that fact that we're still recovering from the Cascade Crest 100 Angel and I decided to jump in when our friend John Spannuth put out a message looking for folks to join him for a hike/run in the Olympics on Labor Day on the High Divide Loop (aka the Seven Lakes Basin trail).  John ran the race too and we all finished around the same time, so we figured we'd all be equally slow and creaky.  And aside from a desire not to miss out on any of our remaining nice weekends, we also had been talking about going back to do this particular trail for quite awhile.  We did it about five years ago as a four day backpacking trip, and had one of our first encounters with trail running when an old guy came bounding up the mountain and stopped to ask us about other nice trails in the area that he could do when he was finished with that one.  Having two days of travel left, at the time we were shocked to find that he meant when he was finished that day.  At the time doing 18 miles in a day seemed impossible on its own, let alone following that up with another hike/run.  So, ever since we started running trails, we've discussed going back to try to match the old guy's feat.

A full description and directions to the trail are here, but for some brief details on the route, being in the second most underutilized of WA's national parks in the Olympics, the hike isn't extremely well-known, but I think it's one of Washington's classics.  It starts at the parking lot at the end of Sol Duc Road (just a few miles past the hot springs) in the Northern part of the park, and travel time from the Bainbridge Island side of the Seattle/Bainbridge Ferry is about 2 hours and 10 minutes so it would be reasonable to get there from Seattle, do the loop, and get back home in a long day.  We spent the night at John's place in Bremerton and left early in the morning, returning to Seattle in the evening after the run, which was a great way to do it.  The trail itself is an 18-ish mile loop route that you could reasonably do as a day hike if you're fit (we saw a couple hikers out doing just that).  It is well signposted as the "High Divide Loop", but it actually connects three different trails: the Deer Lake Trail, High Divide Trail, and Sol Duc River Trail.  There is about 3000 feet of elevation gain and loss, and we've done it in both directions now, and I really don't see much difference in terms of difficulty.  Either way you go, you do essentially all of the climbing right out of the gate, then move along a ridge for several miles before descending back.  Mixing in a bit of running (along with a couple of nice breaks for food and a bunch of shorter breaks for photos) we did the course in about 5:45 on tired legs, so it's very much in the category of do-able as a half-day trail run (although with all of the lakes, views, and beautifully placed camp sites, it's actually kind of a shame not to spend a couple days up there if you have the time).

The trails move first through typically green PNW old growth forest before popping out onto high trail that runs along a ridge with amazing mountain views and through alpine meadows with a remarkable number of small lakes, which are great for swimming if you have time.  There's also apparently decent fishing, because we passed a few guys who said they'd caught Rainbow Trout and had it for dinner.  There are huckleberries available for consumption at several points along the route, and wildlife is frequently visible in the area.  Although we didn't see anything but birds this time around, our last trip we heard that other hikers had seen black bear, and we saw this goat family right on the trail: 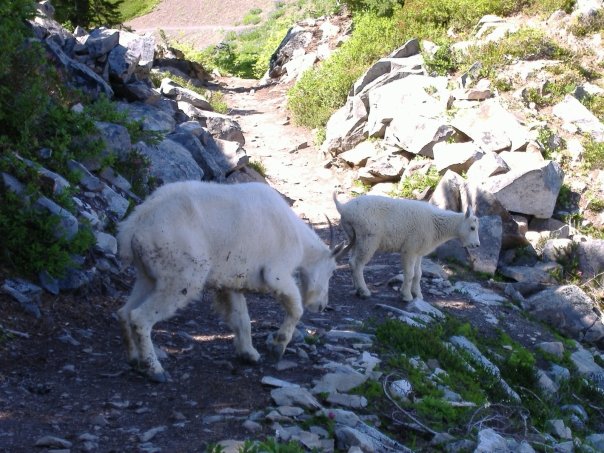 The trail is East Coast quality (rocky and rooty most of the way) with West Coast quality alpine views, including sweeping views of the Hoh River Valley and one of the best views of Mt Olympus (the highest point in the Olympics):

All in all, worth the trip over, and highly recommended!