Preparing to Leave for the Camino 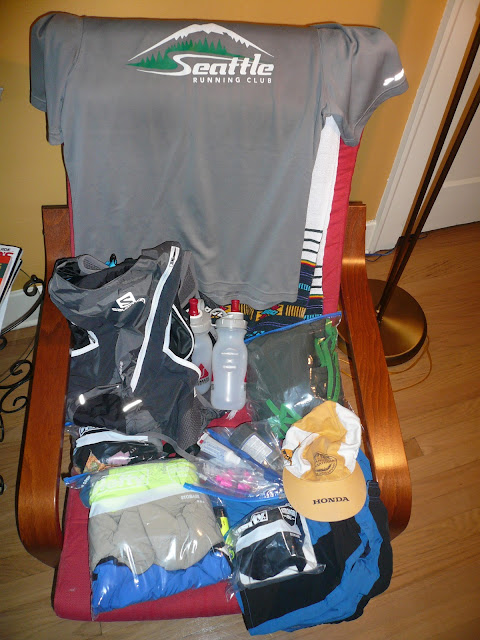 That's a picture of everything I'm going to be living with for the next 6 weeks: a pair of pants, a pair of shorts, a couple shirts (representing SRC across Spain!), a couple pairs of socks, some underwear, a fleece, a hat, some anti-chafing stuff, toiletries, a shell wind/rain jacket, a camera, a little flashlight, a thin sleeping sack, a couple of water bottles, and an e-reader full of NCLEX review materials, all stuffed into a running day pack. The rest, I'm hoping, will sort itself out along the way.

I'm kind of stressed out (although obviously not too stressed to post on the internet), because I'm graduating tomorrow from Nursing school and Angel and I are departing early in the morning on Saturday for Santiago, Spain, by way of a layover in Dublin, a quick flight to Biarritz, France, a taxi to St. Jean Pied-de-Port, and 500 miles on our feet.  After that is Barcelona, my nurse licensing exam, a new job, and the next stage of life.

I'm going to post about the experience, but the frequency will be dependent upon both the whims of my own mood and the accessibility of the internet.  I'm not sure what that will mean - maybe a bunch of times, maybe a couple of times through the whole 4 - 5 week trip.  My wife Angel, I'm excited to report, has also started a blog for the trip, and she'll be posting too.  Here's the link.

My preliminary thoughts are:

1) The trip comes at a big transition point, between school and shifting into work as an RN on the IPU at Seattle Children's, and at the end of my career change process that's been three years in the making.

2) On the Way, I'm probably going to be thinking a lot about the past - with a focus on my religious life, and the role that travel's played in my life.  I'm probably also going to be thinking a lot about the future, specifically related to work and writing - I'm preparing for my nurse licensing exam, starting a new career when I get back, and working on polishing up a rough draft of an article for publication along the way. And I'll probably be thinking about family a lot too - my parents are turning 60 this year, and moving to Las Vegas, if all goes as planned.

3) We didn't plan this trip initially as a pilgrimage in the traditional sense.  Our friends Kiera and Lillie were talking to us about their plans to potentially do the trip, and we impulsively invited ourselves along - that's basically how we decided to do it.  For a 5 week trip, I still feel pretty ridiculously emotionally unprepared because so much of my attention has been focused on graduation.  We'll see what comes of the experience!

4)  I'm done with school, and basically know what's next in life.  Angel probably has more to sort out than me, because now that I'm finally going to be making a decent living, she's going to have a lot of options for where to go in life next.

5) Roughly, we're planning to move an average of at least 18 - 20 miles a day, and hope to be able to get to at least Finisterre (90 km beyond Santiago), and maybe Muxia (30 km beyond Finisterre) by the end of our trip.  Finisterre - a traditional "end of the earth", on the Atlantic coast, seems more poetic as an ending place than Santiago does, to me, anyway.  We're planning to mix in running and walking days, depending on how our bodies hold up.  We're also hoping for a 50 mile day from Santiago to Finisterre at the end, but I have no idea if that's going to be realistic after a month of movement.

Northernsky said…
Tim/Angel - I know this will be an earth shattering adventure for you and all of your friends back in Washington will be thinking of you. We'll be eagerly awaiting your return so we can hear all about your trip.

- Cheers and be safe!

Unknown said…
so excided for you...i get excided just thinking about it...my trip to santiago is not until next year, but i just love to folow you so I can learn more about it...good luck
June 14, 2013 at 6:53 AM