I'm taking a brief break from my series on "How Running Saves Your Soul" (which I hope you'll check out!) to present you, dear reader, with a write up of Washington's newest ultramarathon, the Highland Halloween Hundred, which happened last weekend in the middle of a snowstorm in an only lightly inhabited patch of the Okanogan.  This will be something like a thinly veiled sales pitch rather than a race report - I only completed 1/5 of the race, and Deby Kumasaka already wrote up an excellent account of her experience doing the full 100 if you want to get a full perspective.

For some basic details, the course departed from the warmth of Ras and Kathy's house - a wilderness lodge on a gravel road outside of Tonasket, WA - followed a trail on their property through the woods, climbed up a gravel service road for 5-ish miles, and onto a long section of the Pacific Northwest Trail that first climbs to the heights of the Okanogan Highlands and then descends into the Okanogan Valley.  It was 21.5-ish miles to a turnaround point where runners were given the opportunity to experience the course again from the opposite direction, in case they missed anything on the way or accidentally left something in the cabin.  There were options to do 20, 30, 40, 60, 80, 100, or 120 miles (though all of the options were actually longer because Jah don't make trails round number distances and it's silly to turn around on a trail before you get to the end of it).  According to Garmin, there was something like 8000 feet of elevation gain and loss on each 40 (43?) mile out and back - for the most part this was all done gradually along miles of trail.  The course was well marked, and probably well maintained, thought it was hard to tell because all except for about 5 miles was completely covered in unusually early snow.  Runners for the 60, 80, 100, and 120 mile options were slated to start on Saturday morning.  Us wussies doing the shorter options were slated to start on Sunday morning.

Because it's a new race, and because only about 10 of us were there to experience it firsthand, the main thing I want to do here is give folks a sense of what the race has to offer, and why first time (I think?) RDs Kathy and Ras have created something with potential to be an awesome addition to the WA annual running calendar.  I like lists.  Let's do a list of great things about this year's race together:

Whether they arrived on Friday night or Saturday, this year everyone drove to the race in the middle of a storm - snow, rain, the whole deal.  It's funny, and it probably says something about our respective temperaments, but Deby reported that this made her feel like she was driving into a winter wonderland, "to grandma's house at Christmas", while I felt more like I was in the intro scene of The Shining, which I remembered as involving driving through a snow storm, although YouTube shows that my memory is not as good as it could be:

Oh well, the music conveys the feeling.  In any case, the experience, for me, was totally appropriate for the Halloween theme.  It took a really long time to get there, it was in the middle of nowhere, and we ended up running in the middle of the night.  This is what we saw for most of the race:

Speaking of running in the middle of the night, Kathy and Ras managed to make this race uniquely customizable to the individual runners' preference.  I've already told you about the various distance options - standard and nonstandard - but they made start times work for everyone as well.  Most folks started on Saturday morning at 7:30, but one 40 mile runner, Tonya Hoffman, felt like sleeping in.  That's fine.  She went out on her own at 9:30 and ran the whole deal by herself - hardcore!  Angel and I had to drive over on Saturday evening after I got off of work.  When we got there, we realized that we'd be the only two starting out the next morning (Allen Skytta, who also ran 20, did his run earlier on Saturday).  We felt like running with a group, didn't want Kathy to have to set up an aid station on our account the next day, and wanted to get in some night running, so we asked if we could just go to the turnaround with her the next time she met the 100 milers and start out with them.  So, she granted us an early 3 AM start.  When we left they were talking about having a 'sign in/sign out' method of timing next year, which I think is a great idea - folks can start when they want, go as far as they want, and still have an official honor-system based time.

I should note that it was no small task to make this race so customizable, which leads me to the next point:

If you know Kathy and Ras, you know that they're just freaking good people.  Evidence from this race: Kathy drove an hour round trip multiple times, both during the day and in the middle of the night, to meet the runners and set up the turnaround aid station herself.  She included Halloween candy and hot food that she'd made herself.  Awesome hot food - made from scratch hot food.  At the lodge, she set up beds for all of the runners before we arrived, and made multiple meals for everyone for the entire weekend - Friday through early Monday morning - including various kinds of soups, amazing vegan chocolate chip cookies, and hot drinks.  Ras ran 43 miles before hanging out, welcoming folks, and helping set up the aid station for the 100 milers at 3 am.  They let people stay at their place and didn't even ask us to bring anything to contribute.  The race was free, which meant they went well out of pocket on this to give everyone a great experience.  They both kept amazingly good moods through the whole thing.  They didn't even get mad at us when we unwittingly led a couple of stray Labradors onto their property and into their house when we finished.  The highest quality people you'll meet!  The other folks who came along were fantastic as well, and the event struck a great balance of 'totally fun adventure run with friends' and 'quirky and unique race'. 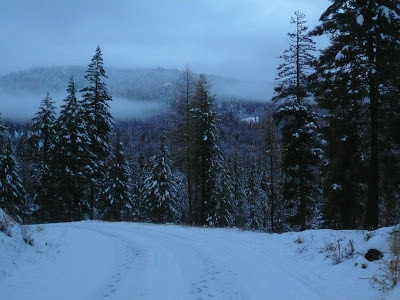 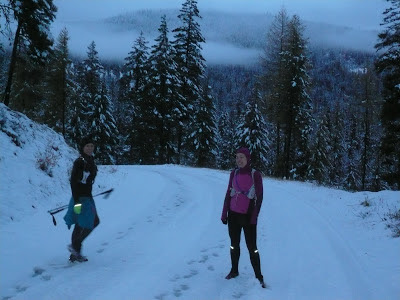 The Okanogan is a beautiful and rarely visited pocket of the country that is really worth seeing, and the course felt remote, but safely so because the trail was well maintained and not terribly technical.  When the sun came up, the hills were gorgeous, covered in snow - unfortunately our camera died right when the sun came up!  (Note for the few New Zealand friends who might be reading - it looked a lot like Central Otago near Cromwell in the winter.  Hi Mary and Sally and the rest of you!  We miss you!)  We were in part of the state where most people haven't been - two hours or so beyond Wenatchee, and closer to Penticton, Canada than any other city.  It took a while to get there from Seattle, but the drive was freaking gorgeous along the Columbia and through some of the prettiest scenery in the state (on Sunday, anyway - on Saturday all we saw was rain).  Plus there's a great bakery in Pateros that you get to hit up multiple times for cinnamon rolls, pies and delicious pizza.  A well made pizza is it's own kind of beautiful.

I know that's bad grammar, but it's definitely true - the course this year was hard in a really unique way because of the snow - the elevation change was gradual and manageable, but the snow made for some genuinely tough running - which in my case should be called 'running', because it took 6.5 hours to go 21 miles, after which Angel and I promptly quit (We had to get home by Sunday evening and decided to get some sleep).  I guess it was technically a DNF because we'd signed up for the 40, but Kathy was kind enough to give us credit for the 20 miler, even though we ran the course in the wrong direction (to our credit, it was the harder direction, we were told).  Ras, who is harder core than Fugazi and Black Flag combined, did 43 miles, and described it as the toughest 40 he's ever done.  For those on the course earlier on Saturday, it was a unique challenge because they were running during the snowstorm, such that the tracks/postholes they made in one direction were covered over by the time they reached them on the way back.

Which brings me to the last, and probably coolest, point - which was that this year we got to see Van Phan and Deby Kumasaka finish off their truly jaw dropping race seasons with a truly jaw dropping performance.  Everyone who ran put in an impressive show in the conditions - Jen Hughes did a 100k after only planning to do 40, and Tonya Hoffman ran 40 miles solo - but Deby and Van were remarkable.  They were the only two who completed the full 100, and both of them were finishing off epic seasons of racing.  Van was on her 8th 100+ of the year (including completing her own 200 miler), and Deby was on her 7th 100.  (The only person in WA who could challenge their accomplishments in terms of flat out toughness this year, ironically enough, would have to be Ras, who ran Van's 200 as well as becoming the first known person to do a self-supported 192 mile 'Double Wonderland, Reversing' run around Mt Rainier.)   This was an appropriately difficult run in unusual conditions for Washington runners.  Even for ultrarunners, their respective seasons are hard to believe.  Those women are genuinely impressive, and it was a privilege to run with them, and to see them finish off their season alone together, appropriately enough, doing what none of the rest of us could on the day, and establishing the course standard on this new race.

Kathy and Ras have set up a really cool addition to the Fall race calendar - it was great to be a part of the first event.  You should do it next year.
Email Post