How to Run Around Mount St Helens 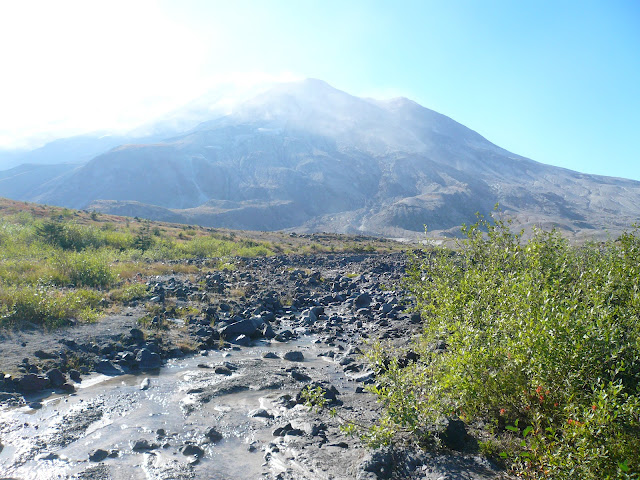 This Saturday, Angel and I and 25 others (give or take) took a few hours out of our day to run the 32 mile route from the June Lake trailhead accessing the Loowit trail around Mount St. Helen's.  It's hard, and we were tired, so afterwards we got some food and drinks. This is a report from that trip written, hopefully, in a way that will be both concise and informative for those who would like to repeat our experience, because really, if you can run this route, you should.  It's spectacular.  If you're in WA you have no excuse not to (other than that it's really hard), but it's worth a trip from out of state as well.  It takes some planning, and due to harsh winter weather and the gravelly ashy surface, some years large portions of the trail are difficult to navigate (call the rangers ahead of time), but it's definitely worth the effort.  It may well be the most scenic and difficult 50k in the state.

The trip spawned from a conversation Angel and I had several months ago when we noticed that there was going to be a race around the mountain.  If I remember correctly, it went something like:

"Oh, cool!  They're going to have a race on that loop trail around St. Helen's that is always washed out!  Oh, dammit!  Only 50 people can do it, and it's already sold out!  Oh, hey, wait, our calendar is open the weekend after.  The trail is bound to be navigable after the race.  Want to find a couple of people and do it?"

We immediately put together a little event and invited a few friends, hoping to find 3 - 4 others who wanted to join us.  Somehow it spread through word of mouth and word of Facebook, and on Saturday morning 27 people showed up, most of whom I didn't know prior to the event.  The cast of characters included: Ras, the dread-locked rock star of a runner who completed the OKT (Only Known Time) on a 190 mile-ish, 44,000 feet-ish double Wonderland run two weeks prior, Liz and Chris, a mother and son combo, the mysterious and friendly John, who goes by Jao Jzqyt on Facebook, Michael Linscott, who raced the trail the weekend prior and decided to come back for another circuit, Arthur Martineau, who ran a sub-20 at Western States this year, and a bunch of others - some of whom had never run that far before.  (The important lesson from this - people love running loops around mountains together.  You just have to give them the chance.)

Rather than writing up a traditional 'run report', what follows is a list of logistical bullet points to help those who might like to follow in our footsteps, with my own annoying commentary woven in, such that you can't avoid reading it if you want the logistics.  Sorry suckers!  I didn't say reading this would be fun!  Just that the run will be!

June Lake Trailhead - there are several trails that will take you to the Loowit, but this is a perfect access point on the southern part of the mountain - take it a mile and a half up the hill to the Loowit and hang a left.  After that, follow the cairns to stay on the Loowit, keep the mountain on your right, and don't turn left again until you get back to the June Lake trail. (Seriously, if you go left at an intersection, it's wrong, so just stop it.  Especially you, Jon!  The one exception is at the Summit trail - at this intersection stay straight (which actually isn't left, but it's more left than the alternative) rather than turning right, which will take you very obviously to the top of the mountain.  PS - I tried to talk my pace group into turning left at one point near the end.  Luckily their good sense won out over my own bad judgement.)

Clockwise - you have water access at reasonable intervals, and you get the couple miles of boulder fields out of the way early - the boulder fields would suck on tired legs!  They're boulders made of sharp pumice that you have to (get to) rock hop across.  Falling would make you all bloody and hurt.  The trail gets more and more scenic as you go, and the last 9-ish miles are mostly runnable, which you'll appreciate after the boulder fields, ash and scree that make up most of the first half of the course.

Will I get lost?

Probably not - only 3 of our 27 runners got off track for more than a couple minutes.  In each case it's because they turned left.  The one area where the trail was hard to follow this year was at the crossing of the Toutle River - it's the first and largest water source on this route, and the largest river crossing.  After you cross the river you have to climb up a rope on a sheer 50 foot cliff that doesn't look like the kind of thing one would go up on a trail run.  For some reason there are no cairns there either to tell you where to go.  My advice: follow the trail until it dead ends into the river.  Cross the river (don't go up or down stream trying to find the trail.  It isn't there.).  Take a few steps to your left and look at the wall in front of you.  You should see a rope hanging down from that wall.  Climb up it, and you'll find the trail.  Also, if there's a bad storm sometime after I write this, this area may be totally different.  This crossing apparently shifted by about 1/4 mile last time there was a major winter storm (2005?) b/c 100 feet of gravel was washed away by glacier and snow melt down the Toutle.  (It's pronounced "tootle"). Also, go ahead and bring a Green Trails map, just in case you 1)  turn left, or 2) need to pull out early in an emergency at one of the other trails that access the Loowit.

How long will it take me?

Our fastest runners took 8.5 hours (they're badasses who win races, run 100 milers, and do 50k's on their lunch breaks during training).  Our longest runners took about 16 hours after getting off track for a bit.  Everyone else took between 9:15 - 11:15.  Think 50 mile times due to about half of the course being on terrain that is often difficult/impossible to run for most people, so must be hiked.  The elevation change is reasonable for a mountain ultra - it's about 6700 feet dispersed throughout the run.

What should I bring with me?


- NW Forest Pass for parking at the Trailhead
- 60 or so ounces of water (i.e. two bottles or a hydration pack).
- Water purifying method
- Enough calories for 8 - 16 hours of movement, depending on your pace and whether you like to turn left.
- Clothes for the weather - check the forecasts and talk to the rangers beforehand to figure out what that will be.  Hat and gloves and jacket are pretty much a definite if you're like me and don't like risking being cold.
- Map
- A camera to take pictures of all of the amazing things.
- A headlamp in case you get stuck in the dark - the trail is often made of dust the same color as everything else, and it's sometimes difficult to see cairns, so it would be super hard to follow the trail in the dark without a light.
- Sturdy shoes that can take a pumice-beating  (Minimalists would suck unless you're really hardcore.  Even then I'd suspect that you're just pretending that it doesn't suck b/c you're so into the minimalist thing.)  Hokas seemed to do well.  I wore my standard Cascadias, which were perfect as usual.
- Sunscreen - you're fully exposed for most of the run, which of course means great views!
- Other people - it's harsh terrain, there aren't many hikers, and you're often a long way from anyone else unless they run along with you.

When should I go?

August - September seem best and most reliable in terms of getting good weather, which all Northwesterners know, but you might not if you're from out of state.  I've heard the water sources can get more sparse in dry years, but this was a dry year and it wasn't an issue.  Also, look for when they're doing the Volcanic 50 race, and do your run the week after.  That way the trails will be guaranteed in as good of shape as ever, and you can read race reports for up to the minute tips.

Where should I stay?

We stayed at the Cougar RV Park and Campground group camp.  It was cheap ($20/night for the first tent, $10 for each additional), they had clean, hot showers, and it was well maintained.  Definitely call ahead if you're planning to run between the minor holidays that demarcate the summer in the NW - July 4 and Labor Day.  When I called they said they had a ton of space ("We sometimes host the BOY SCOUTS" they told me, with a tone that indicated that they knew how impressed I'd be), but it's actually not that huge of a place.  I do expect that it doesn't get super busy on many occasions - There were in fact a small group of Boy Scouts there along with our group, and the staff seemed overwhelmed by the busy-ness.

Where should I eat before and afterwards?

We ate at the Cougar Bar and Grill.  It's the kind of small-town place that I love, having come from such a place myself, but which pretentious bungholes might complain about (of course, none of them are on the trails).  There were families there, staff were super friendly, most of the decent selection of microbrews were sold out but they were really apologetic about it and gave us the last of the beer when it tapped out, the fries and burgers were cheap, serviceable and the best option, the gravy was brown and gelatinous, they accommodated our large group happily (and were reasonably quick), and they didn't complain about splitting checks.  I also hear they have awesome pie, but were out of it when we got there, unfortunately.  Call ahead if you're going to bring a big group, out of courtesy.  There's also a pizza place in Cougar if you'd rather have that.

Yes!  It was seriously 8 - 12 hours of surreal volcanic historic intriguing amazing, with very little time spent in areas that wouldn't be described as really really scenic!  If you're a trailrunner, you should put this on the list, even if you aren't from the PNW.  Along with the challenging terrain, there are miles of really pleasant runnable sections through the Plains of Abraham which my wife referred to as "my dream trail".  Here's some more of what you'll see, remembering of course that the pictures can't do it justice:

If you enjoyed this post, I hope you'll check out my book The Dirtbag's Guide to Life. It's basically a fun "how to" guide like this, but for your entire existence. 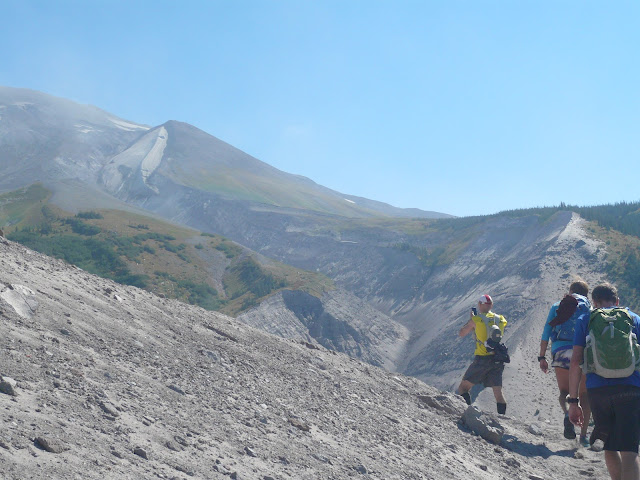 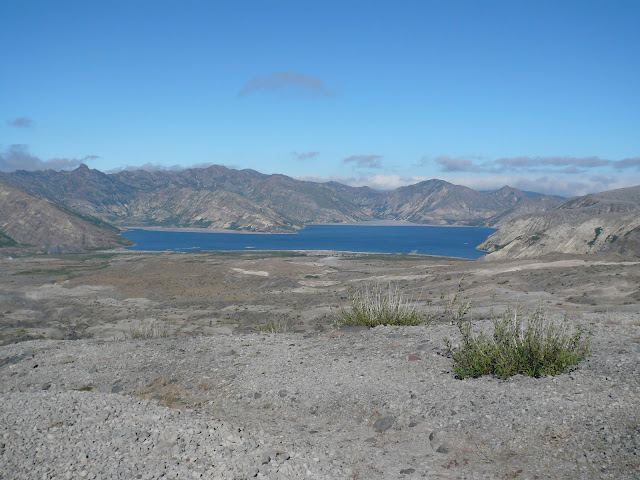 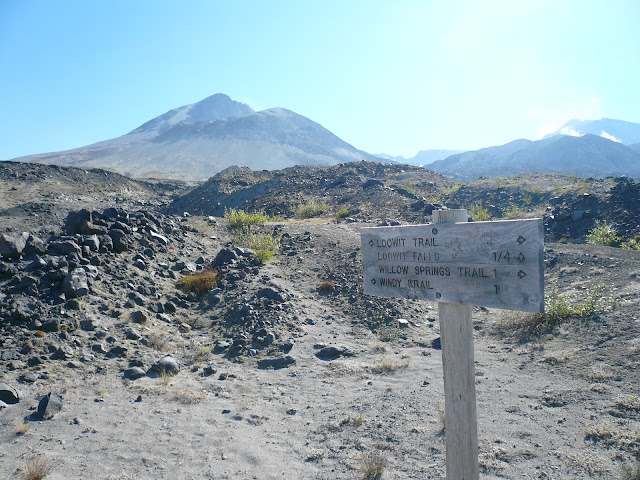 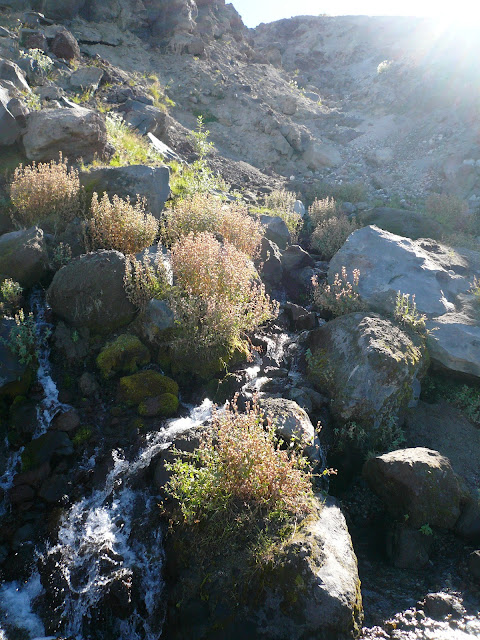 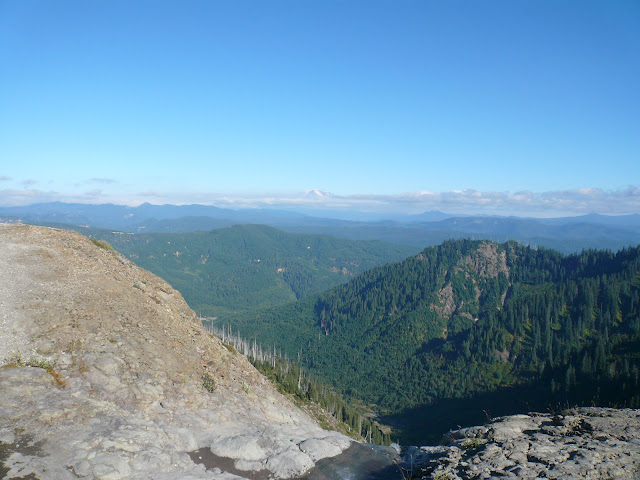 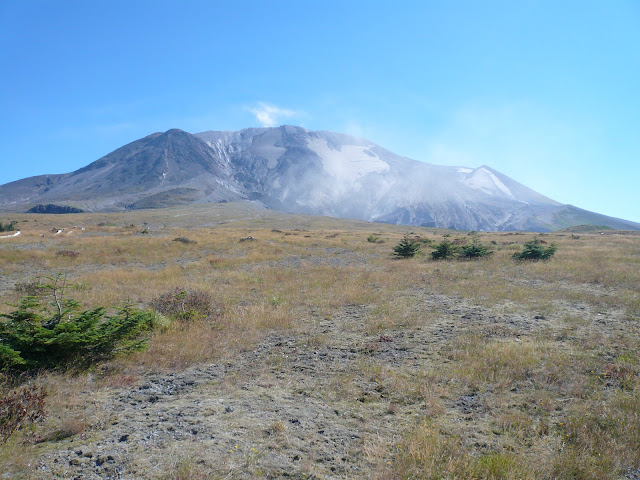 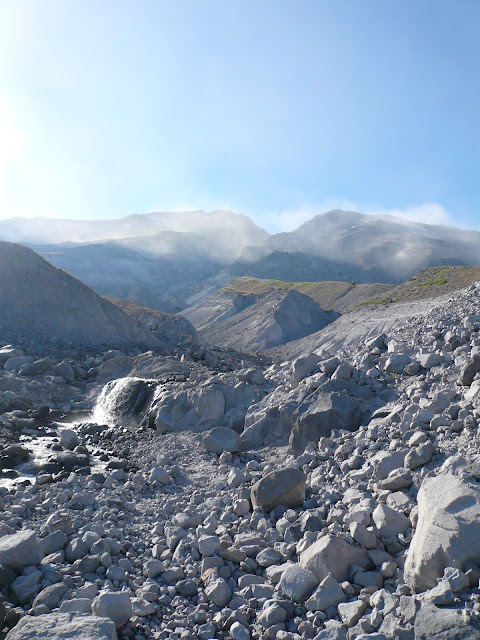 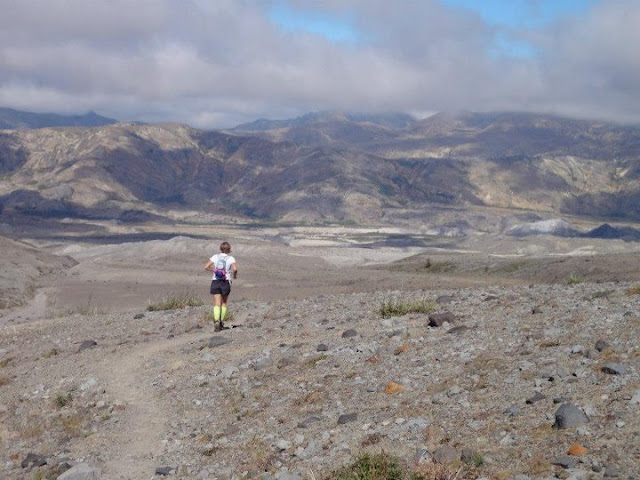 jenn said…
thanks for the beta. i'll look out for any pretentious bungholes afterward. xo jenn shelton
July 13, 2016 at 6:54 PM