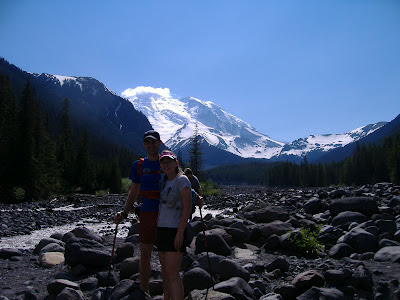 My initial thought when I started this blog was that I would use it as a place to post personal reflections on the running life.  Then I came up with what I thought was a better idea to morph it into a blog about the running community in Washington state, and to collect some of the more interesting stories into one place.  It's a niche to be filled on the internet, and I've gotten good feedback on my posts to that end.  But it's summer, and I have more time to spend on the internet, and I'm finding that I'm still not writing here as much as I'd hoped.  I have a couple of those types of posts coming down the pipes, but I was hoping to be posting several times a month, at least.  I've kept a blog for 6 years now, and I feel like I'm not getting my normal writing outlet.  Part of that is because I've been spending more time running, and part of it is because I've been limiting myself to staying on topic.  Thinking that I'd like to start including some of the originally-intended personal reflections, I sat down and crafted an extended email to my sponsors and funding sources to get their approval.  Then I realized that they don't exist, and that I can do whatever I want because this is my own damn blog.  So, here goes.  I won't trouble the world by posting this to public Facebook groups unless it's one of the historical/running community posts, and at some point I'll figure out how to make a link so you can access those without having to sort through these, but I will henceforth be indulging myself by occasionally including some more personal reflections - still, I think, related to running.  I hope that we'll all benefit, as I'll be able to keep my writing skills sharp with these (probably more frequent) personal reflection posts to provide you with a higher quality of bloggage on the others.

This decision was precipitated as I was trying to sort out what I want to write for my next historical post, which is going to be about the White River 50 Mile Endurance Run.  It's coming up at the end of this month, and a lot of us locals are training for it, so it seems timely.  It's my first 50 of any kind, and I've never been to the event, and my thought is that I want to gather some historical data now, but write the post after I've actually had the experience - to write what I know, as the proverbial "they" say.  I don't usually make a formal outline, but I do generally make a little mental plan of attack for each of these entries, and as I was doing that for the White River post, I was also doing camping dishes, cleaning smelly running laundry, and cooking a big vegetable runner's lunch.  And, interestingly enough, enjoying my life in its simplicity.

Since we've been bumping up the mileage training for 50 miles in the mountains, (and since I got out of school for the summer, and since Angel bumped back her FTE) life outside of work has gotten significantly more centered on running.  We've been doing two long runs on weekends, and a longish run midweek, and one or two shorter maintenance runs, so we've been spending a lot of time on the trails and occasionally roads.  When we haven't been running, we've been Resting, Icing, Compressing, and Elevating, cleaning smelly running clothes, reading books by runners, or planning maps and strategies for upcoming training/fun runs.  Our social life centers fairly heavily on running - we spend between 3 - 10 hours on the weekend with friends on the trails, and Mt Si has been our weekly date night, so by the time we're done we're usually ready to go home and crash in front of the TV.  Our diet has been transformed into mostly vegetable fuel for running, or beer and burgers to satiate post-run appetites.  Every once in a while I'll go on a hike or a bike ride with friends, or a nice walk around the city, but secretly I'm considering it all as part of my training. Significantly more than building  up for a marathon even, training for real ultras seems to require a single-minded focus - at least for a couple of months.

When I write that out, it sounds kind of obsessive even to me, but I have to admit that it's a really satisfying type of obsessiveness.  I think there's something to the 'Born to Run' idea - or, better, "born to get off of your lazy ass" idea - that human beings have historically survived by hunting, gathering, or farming their food, and are made to think, to move, to get tired, to eat, to rest, and to reproduce and probably not really anything else.  Seems like for most of us these days, not much is required in terms of actual physical work, and for people like me whose jobs don't require much manual labor, running provides balance as a way to get in physical exertion needs through recreation.  This is all hypothesis and conjecture and subjective experience, but personally as I've gotten increasingly active, I've felt like life is more like what it should be - balanced, happy, challenging, beautiful, social, exhausting, occasionally scary, fun, uncomplicated.  There's also something in here about the satisfaction of running around in the woods, but that's probably for another post.  The point here is that, while I'm not sure I'll be the type of person who runs 50 - 100 miles on a regular basis (I've historically bounced between interests on a regular basis), I'm not sure that I won't be either, because I'm starting to get the appeal of the kind of simple life that is a requirement of training for even an average ultrarunner.
Email Post