Good People Running Through the Mountains Together: The Seattle Running Club 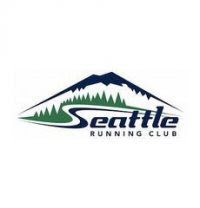 (Hey SRC - I stole the .jpg above from your Facebook site - I hope you don't mind!  If you do, let me know and I'll take it down!)

You can find a million web sites (and I guess books - do they still make those?) giving advice on how to become a better runner.  In my experience though, the actual way to become a better runner is to find some gracious people you like who are better runners than you, ask them how they got that way, and then chase them around for awhile trying to keep up.  In the PNW, there seem to be about a million little groups running around at any given time doing basically that.  Sometimes those groups get organized and give themselves names, put together events and group runs, and advertise themselves to share the experience.  They're a huge asset to the community, and one of the major reasons that new runners (like myself) figure out how to move from 'running to get in shape b/c  you're supposed to be in shape' to 'I love running and I want to spend as much time as I can in beautiful places doing it, even if it means I have to miss some of my favorite television shows'.  Every town in Washington seems to have at least one of these organized groups (The Skagit Runners, The Greater Bellingham Running Club, The Olympia Trail Runners, The Tacoma City Running Club, etc. etc.), but my Seattle-centric favorite is the Seattle Running Club.  (If you're not a Seattleite, or if you resent big city folks suggesting that their things are better than yours, I understand, and I feel your pain.  Feel free to insert the name of your favorite group in where I say "SRC" - a lot of what I say will still basically apply, and  you can pretend I say other things when it doesn't.  In a completely unrelated note, before proceeding further, you should go to the SRC website and check out this hilarious interview with Uli Steidl, a club member who just won the Masters division at the Boston Marathon - seriously, it's the funniest thing I've read online in a long time.)

Historically speaking, the SRC is actually still really young.  Based on their (slightly outdated) Runner's World Profile, and an interview on their website with their current president, Win Van Pelt, the group was started in 2003 by Scott and Leslie McCoubrey in cahoots with Win after a chance meeting on the trails which led to the discovery of their shared sense of a need for a non-profit to promote trail running in the area.  Based on conversations I've had with grizzled old ultra veterans, it was originally closely associated with Scott and Leslie's store - the Seattle Running Company - but in recent years has taken on its own identity, and has a couple of primary bases at Fleet Feet Seattle (which took over the Seattle Running Company space on Capitol Hill) and The Balance Athlete in Renton.  They currently organize group road runs on Tuesdays, Wednesdays and Thursdays through at least one of those stores, along with Sunday trail runs through their Meetup site. They're closely involved with organizing, staffing and promoting the White River 50 (everyone's favorite race ever, and for a long time the 50 mile national championship), the Bridal Trails Running Festival, and the Cougar Mountain Trail Run series - a great set of events designed to allow runners of various abilities and distance preferences to experience trail racing.  In my experience, they also do a great job of promoting other groups' events in the area, and generally encouraging people to run, especially on the trails, which are of course Washington's greatest running asset. And, from what I understand, they have a pretty darn good cross country team, which I didn't know existed as a club sport outside of college.

But all of that is really just background detail.  What's more important is that being a member of the SRC makes you awesome.  When you join, you get a singlet or tech shirt that you can wear to events (many of which are discounted with SRC membership) and pretend you'd be as fast as alumni like Hal Koerner, Scott Jurek and Krissy Moehl if you weren't injured.  Or, you can go and pretend you're as impressive as current members like Uli and Trisha Steidl, Greg Crowther and Eric Bone, but you're taking it easy because Badwater is coming up.  Or, you can pretend you're as cool as current member and Death Cab for Cutie singer Ben Gibbard, and that sometimes you run together and give him financial advice.  (I'm pretty sure that's him at roster number 1298 anyway.)  Or, you can just let people know that you support the club because they're out doing great things in the community, like raising funds for the Washington Trails Association and organizing work days to make sure everyone has access to trails in the area.  The people you tell will think you're a good person.

But seriously folks, actually what's great about the SRC (and this is probably where you'll want to start inserting the running club of your choice) is that it's a community of serious runners.

The community piece of that is important - it's the tribe that keeps the individuals going, and it seems that this is especially true on long trail runs, where you generally need someone to convince you that it's a good idea to keep going, against your better judgement, in order to finish the distance.  (My wife Angel credits one of our regular Sunday running partners and amazing long-time ultra runner Glen Mangiantini, with getting her through her first 50k recently when they met up at mile 20 - thanks Glen!).  It's also true in life in general - runners tend to be great people (although I admit that I'm the kind of person who thinks most people are great people until proven otherwise), and the SRC and these kinds of clubs provide a venue to meet and organize around common interests - running, the amazingly beautiful environment of the Pacific Northwest, and beer.

But maybe more importantly, in my experience the SRC is a club that gathers serious runners.  Sometimes people use that language to describe people who are fast, or train all the time, or win races, or do crazy miles, but that's not exactly what I'm talking about here.  What I'm talking about is more like what Haruki Murakami was talking about in What I Talk About When I Talk About Running (follow that?).  Serious runners are people for whom running takes on a deep, spiritual kind of significance.  They don't just do it to stay in shape or to pick up women while trotting around Greenlake with no shirt on.  They do it because of a personal quest to see what they can accomplish, or because they experience euphoria when they do, or because they feel like running connects them to the world and other people in a way that nothing else does, or because they know it makes them a better person, or because it's cheaper than therapy and they can't live without it.  These are the kinds of people who sit at work thinking about running, or organize their vacations around events, or take days off of work midweek to run through the mountains on self-supported ultramarathons with their friends (apologies to SMRG runners who aren't also SRC members).  Not every serious runner in Seattle is in the SRC by any means, and not everyone in the group is a serious runner, but it seems that, for the most part, they are - these are people who get it, and want to share it with other people.  It's a new group, and it's not the only group in town, but it's an iconic example of what every running community needs in order to thrive and grow, and it provides something really meaningful.

And so, my hope is that the SRC keeps growing and promoting serious running in our community - not because everyone needs to run an ultra (although it couldn't hurt), but because runners are great people, and they need to be involved in their community, and because running is a beautiful human experience that needs to be shared, and because Seattle, and the PNW, is just about the best place in the world to do it.

jayaresea said…
Thanks for this post, Tim (esp the link to the Uli interview!). The diversity of SRC's runners (trail/ road/xc, fast/slow) attracted me way back in 2008 and I'm loyal to this day.

Unknown said…
Thanks for reading! The Uli interview's my favorite thing the internet's produced in a long time. Hope to meet you sometime!
May 4, 2012 at 8:32 PM