Junk and Other Stuff

I haven't written in awhile, because things have been busy busy busy this week! For some of the headlines in roughly chronological order from when they happened:

I'm kind of related to that 'Don't Touch my Junk' guy!

He's my cousin's brother-in-law (follow that?), and was on his way to a hunting trip with my cousin when this happened - he called him right after the video, actually, to tell him that he wasn't going to make it! It must run in the family, because I don't want the TSA to touch my junk either. See, I'm a libertarian folk hero just like him!

My friend was on Jimmy Fallon!

My buddy Yuuki toured with Sufjan Stevens, so he got to play on the Fallon show along with dressing up in awesome P-Funk clothes! The most Awesome thing ever! You can see him on keyboards at 2:55. Great work Yuuki! Living the effin dream!

I had Thanksgiving dinner in a bar with family! 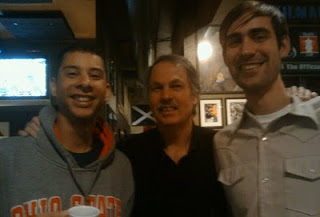 We hung out at the St. Andrew's Bar and Grill in Greenlake. I like that place. Here I am with my uncle and the 'Can't touch my junk' cousin:

Angel and I ran our first half-marathon!

13.1 miles of running is a lot! But we did it - Angel kicked most every other woman's butt, and I also kicked most of the women's butts.

Now we're planning to go to Rome in March to run our first Marathon!

Because we've never been to Europe, Italy looks like an awesome place to go, we get to run right by the Vatican and the Coliseum, and we need some motivation to train for a Marathon. It's going to be epic if we can pull it off!

I have two finals in the next week, despite only having one class.

I got a 'mandatory no pay' today at work.

It's kind of like the opposite of being called in. Now I have to study by looking at disemboweled cats and chopped up sheep brains. Gross!
Email Post