The Death of Styrofoam God 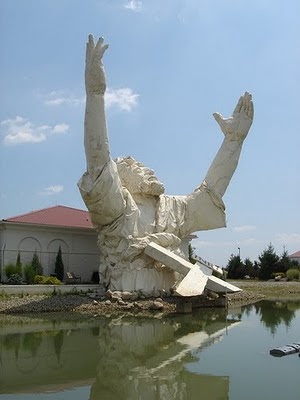 During (The Death of God):

After (Terminator Jesus - credit to Karyn Honigford for that designation): 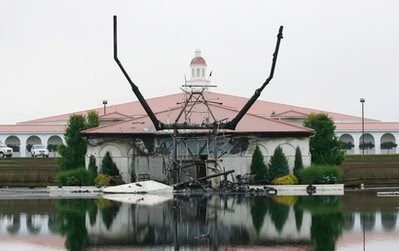 Okay, it's been eating up my day anyway and I have a personal connection, so I feel compelled to throw out some thoughts on this, the most important American religious event of 2010: God's smiting of Touchdown Jesus in Ohio. A little synopsis for those who don't know:

Solid Rock Church is a congregation in Monroe, Ohio, of the sort that the movies always make fun of: tacky, diamond-encrusted and gold-plated, charismatic, tanned, blessing-promising, tongues-speaking, slick, greasy, neon, mega-, and so forth. At the time of writing, their website is inaccessible because their statue, 'King of Kings', from the picture above was struck by lightning and burned to the ground last night - a divine act of comedy gold which is dominating Facebook status updates and seems to have gathered immediate national media attention. The whole story seems like a piece of fiction written for an episode of South Park: the six-story statue was built in 2004 with a wood and steel frame, and an exterior made literally of styrofoam (with some plexiglass, I believe). A local comedian wrote a song about it called Big Butter Jesus because it looked like a butter sculpture at a county fair (my favorite description from the song: 'Can't believe it's not Jesus'). It cost a quarter of a million dollars and quickly became a well-known roadside eyesore along I-75, a main North/South route between Michigan and Florida. It stood directly across from a giant porn-store billboard and two massive flea-markets, and my vague (maybe fictional) recollection is that a church representative said that they built it facing the nearby Hustler Hollywood store and Bristol's strip club so that patrons would enter knowing that Jesus was watching them.

I don't know where to start with this, so my thoughts are, in no particular order:

1) I knew Big Butter Jesus (BBJ) before he was famous. The church is only a few miles from where I grew up, on the route between my dad's business and the highway. I went to the church a few times as a teenager, and even helped to lead a local youth event there at one point. Their aesthetic was always too televangelist for my liking, (they had a glowing pink neon dove sitting directly through the entrance to the church) but I knew a bunch of people who went there regularly. They built the statue after I'd moved away, but it grew out of a spiritual ecosystem with which I was familiar, and I probably know people whose tithe dollars helped to finance this beautiful piece of art.

2) How is it that the power trips of medieval church leaders in Europe produced enduring and undeniably beautiful cathedrals, The Sistine Chapel, and Michaelangelo's David, but my cultural heritage continues to produce this kind of plastic lightning rod of a messianic representation? Did the ancient Celts do this sort of thing as well, and we've just lost the evidence?

3) Who spends a quarter of a million on a Styrofoam sculpture? Was this secretly supposed to be like one of those Buddhist Sand Mandalas, built to symbolize the impermanence of life?

4) There's something really symbolically important here about American Christianity. How do we get from the beatitudes and the early church to an obscenely expensive, disposable symbol for the evangelical army engaged in a culture war against pornography and sin and good taste? It seems like BBJ should be some kind of ironic art school project created by a pretentious PBR-fueled 20-year old as a critique of American religion, but as far as I can tell they were serious. People viewed this thing as a spiritually edifying piece of religious art. There's something in here about heading to Wal-Mart and Applebee's after church on Sunday, but I'm not sure quite what it is. All I know is that I'm glad that God smited (smote?) it, if only for the comedic value.

5) Despite all of that, I hope they rebuild out of gold, or coat it in resin or something next time. I'd give money towards that end. The world needs more of this kind of thing.

6) How awesome would this be as a PR stunt if on the third day after BBJ's death, they raised a 10 story glorified King of Kings from the lake in front of the original?
Email Post
Labels: nonsense religion