Okay, I officially give up. I'm not getting any more work done today. There's too much on my mind, so I'm going to unload it on the internet. Here's my collection of not entirely related vignettes:

1. On Presidents Day our local and world's best thrift store, Value Village, had an everything is 50% off day. I picked up the following for $2.50: 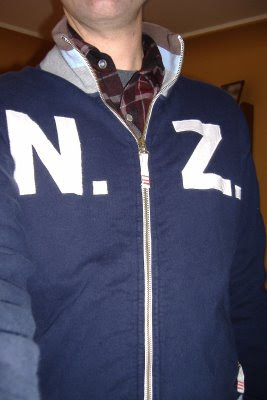 Represent, New Zealand! I came home almost 4 years ago with no real clothing-type souvenirs aside from an All Blacks scarf, but now I'm strutting around town nostalgically in my not-quite-stylish-anymore Eurostyle zip up sweatshirt thing.

2. a. Once again, BACOM is tomorrow. I'm not terribly stressed, but I am anxious or anticipatory or something. One way or the other this is a big transition point, and I'm happy to be feeling that whichever direction I'm sent, I'm in a position with much potential. It feels significant, like the eve of a marriage proposal or something.

2. b. Yesterday I told the staff at St. Margaret's that the only thing I know about the BACOM weekend is that it has a talent show. Seriously, I mean that. The staff suggested that I do a ventriloquist routine where the puppet character is a disgruntled aspiring priest who critiques the discernment process. Taking the advice of priests will get you in trouble.

3. Shayne and I had a nice visit last weekend. Having family visit reminds me that I sometimes miss the peace and calm and warmth and unpretentiousness of the Midwest.

4. The reason Shayne visited, of course, was to go to the first show in the Murder City Devils reunion tour (good article on them here), of which this seems to currently be the only video evidence on YouTube:

Still well respected in a lot of circles, a lot of the Seattle street critics are over the MCD's - they originally broke up like 7 years ago and aren't really on the scenester radar anymore, particularly since the kids can't seem to pallet Spencer Moody's current project. Which I think somehow gives them credibility again. Midwesterners, of course, aren't pretentious enough to be 'over' anything yet. Great Show, by the way. I've stopped rating shows according to favorites, but this band puts on a Great Show.

5. Being in Seattle it's hard to miss the Midwest because I really love this place. There's an incredibly high genius/per capita rate here. As Shayne pointed out, there also seems to be a high insanity rate, but there's a thin line between crazy/genius. Particularly in the religious and musical worlds, I somehow continue to run into brilliant people.

6. I had Mexican food with this guy on Tuesday. I'm excited about what he's doing - starting a church with a bunch of friends, many of whom are homeless. As Soren Kierkegaard said, there aren't any Christians in the world, but this guy strikes me as a Christian - which is intimidating.

7. Tonight is another Theology Pub. I was thinking about talking about ministry in some capacity, but I just have to use something from Peter Rollins. I just love that guy. A theologian's rock star. I can't believe I missed him when he was here last year. My new favorite overly confident Irish guy. (The old ones were Bono and then this guy Angel and I met in Australia named Kyle, pronounce "Kayrl")

8. This time next week, it will be my birthday (almost), Lent, and a new stage in my life. It feels like a good time for some transition.

Tying all of this together? I've found the wave I'm planning on riding for a while in Anglicanism and in the emerging church conversation. It's good to be in the Puget Sound Convergence Zone.
Email Post