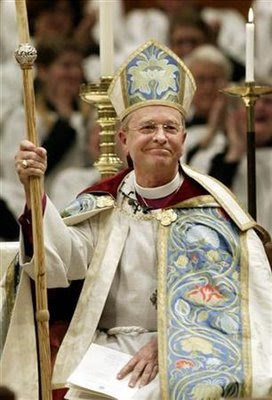 Yesterday, as you may have heard, Episcopal Bishop V. Gene Robinson from New Hampshire was announced as the invoker for Barack Obama's official inaugural event to be held this Sunday at the Lincoln Memorial on the Eve of Martin Luther King Jr. Day. (By fun coincidence, he was also in Seattle yesterday, and I had the honor of receiving Eucharist from him at my local church, St. Mark's Cathedral.) I'm happy to hear it, not just because I appreciate the historical significance of Bishop Gene's appearance, but also because I'm hoping that someone can arrange a boxing match between him and Rick Warren - the conservative pastor who is invoking at the actual inauguration - so America can finally determine who the real Christians are.

If you ask me, these two have been destined for years to duke it out in the squared circle over the issue of homosexuality. As Conservative despisers love to point out, Bishop Robinson's given first name is 'Vicki', which of course destined him to be gay, just as women named 'Billy Jean' are destined to be lesbians and "not my lover". Rick Warren pastors a church called Saddleback. Let's just give them the gloves and let them duke it out. Pay per view. Superbowl halftime. Whoever wins gets to keep the eternal souls.

These two have been made into iconic figures in the religious culture wars, and it should be said that in the past both have made gracious but unsuccessful attempts to make nice with the opposition. In recent weeks though they've been been playing the adversary quite well, and going toe to toe on the ecclesiastical/political stage. Warren - long the anti-gay - famously backed Proposition 8 in California which took away the rights of anyone but the straights and closeted queers to marry one another, which prompted Robinson to say that it was 'like a slap in the face' when Warren was chosen to pray at Obama's Inauguration. In recent weeks, Warren, who has also voiced support for Anglican bishops who continue to be against Robinson's right to exist, has upped the ante and offered refuge to Anglicans leaving the Episcopal Church on the grounds of his church. This, of course, will be taken as an (predictable) affront to Bishop Robinson, who is of course the sole reason that no God-fearing Christian wants to be an Episcopalian anymore.

There's only one proven way to settle religious disputes this serious: Violence!

While some of you might be thinking that the larger, more 'masculine' Warren would have a clear advantage, you obviously haven't been living on Capitol Hill in Seattle. If you had, you would realize that gay men are universally in much better physical shape than straight men by the time they reach the age of 25 (it's been proven by science). Beneath the vestments, I'm guessing that Robinson has a Rocky Balboa body, while Warren is more likely the Eric "Butterbean" Esch body type. After being punched around a little bit, Robinson would clearly win and America would be freed from the clutches of homophobic Christianity.
Email Post
Labels: nonsense Politics religion satire (in case you were wondering) The Gays

Anonymous said…
Oh Tina. You're so whitty. I got to hear the bishop last night at town hall with some fellow presbys. He blew me away. Such a well spoken person and so sharp!

Anonymous said…
you really should propose this idea to trey parker and matt stone. even if the match never happens, they can make it happen.
January 13, 2009 at 6:09 PM