Spiritual practices are supposed to make you more alive, and more conscious.

This morning before I got in the shower, I looked in the mirror and was amused to see this: 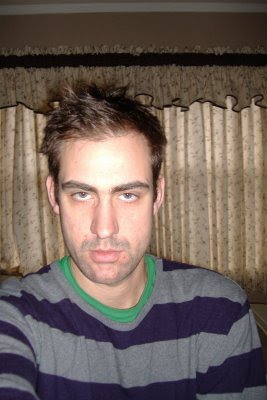 The immediate and embarrassing image that popped into my head was this: As I was in the shower, I was thinking that it would be funny to put up a post with the pictures side by side. Tim in the morning and Nick Nolte's mug shot after a bender. A little self-deprecating humor and an outdated and not that funny joke about an alcoholic celebrity who can't keep himself together.

Lately though I've been dabbling a bit in centering prayer practices, and specifically in the Eastern Orthodox practice of repeating the "Jesus Prayer" until it sinks in ("Lord Jesus Christ, Son of the Living God, have mercy on me, a sinner".) As I was mantra-ing (yes, this morning I was quietly repeating the Jesus prayer in the shower) it struck me that I'm an asshole and my humor isn't always funny. I also remembered that my parents sent me a book called "Wisdom" for Christmas, which is a set of pictures and testimonies from fifty notable grey-haired types. Nolte's in there, I assume despite/because of his notable struggles in recent years with drugs and alcohol, and he's the only one I've read so far.

"Truly, the East is about finding who you are, spiritually inside. You don't even have to use the word "spiritual." It's about finding who you are. The reality of who you are. And when you reduce it down, it becomes that the miracle is life itself...I have heard life described as being on a platform just the size of your feet on a pole three miles high; and that's what consciousness is, and awareness: how to stay on that pole three miles high on a platform like that."

Thank you Nick, and thank you Jesus Prayer, for the reminder that, spiritually inside, I am an asshole who sometimes slides down the pole on purpose because it's fun. I, like the rest of us, make fun of people with problems that aren't funny and I don't understand.

Jesus Christ, Son of the Living God, Don't mess with Nolte, and have mercy on me, a sinner.
Email Post
Labels: My Philosophies for life religion