Dear Relatively Faithful: "Yes We Can, but No You Can't"! 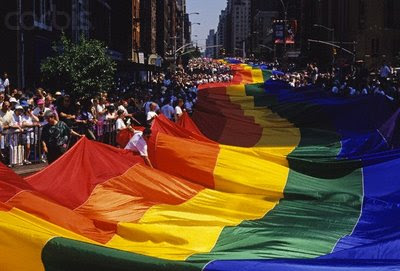 Yesterday I received the following email that I just made up:

In Tuesday's historic election, my state voted resoundingly to put Barack Hussein Obama in the White House which I celebrated as a symbolic culmination of the work of the Civil Rights Movement - the fulfillment of "The Dream" and all that. However, a few hours later I found out that on the same ballot, the same citizens voted resoundingly to actually take away my established civil rights as a partnered gay male, overturning our Supreme Court ruling that a ban on Gay Marriage violates the Equal Protection Clause of the California Constitution. What the Hell happened, and as a fake man of the cloth, what do you think I should do?

Yours,
Confused in California

I have no idea what happened in California, and I'll tell you that I'll never understand your state - Arnold Schwarzenegger, the Castro, Saddleback, Berkeley, Hollywood - you people aren't so much diverse as you are erratic. Have a look at the Wikipedia article on Proposition 8 and start to see if you can make political sense of it. What an unbelievable disappointment.

As a fake man of the cloth, what I think you should do is:

1) Fight the Proposition. Start gathering signatures now to get a new one on the ballot at the next election, and keep up the educational campaign. This is just another setback in the Civil Rights movement and equality is headed your way. Use Civil Rights Language and rationale - you have truth and morality behind you, and that will eventually win out. California will help set a precedent, and your grandkids will look back on this era with disbelief, just as I look back on the Segregation era with disbelief. (By the way, www.protectmarriage.com, it should be www.protecthomophobia.com. Do you think that 50% of American heterosexual marriages end in divorce because one of the partners decides to marry a queer? Are you afraid that when people see your wedding ring they'll think, "Ahh, he's a total fag!" What's the deal? You should know that the young people I talk to want to avoid marriage because the straights have screwed it up, not the gays.)

2) If you want it, go ahead and get married as a form of non-violent resistance. If you haven't found an affirming religious (or otherwise) community, find a friend, get them legally ordained by the Universal Life Church (it's free and takes about a day), and have a ceremony. Get a civil union to protect your legal rights but call bullshit on that form of segregation by submitting a signed and witnessed marriage license concurrently. Civil unions aren't 'enough', and separate will never be equal. We've reached this point in history because gay couples have become visible and vocal. You've gained the respect and recognition of a large segment of society, and that will only increase as you, and queers in rural areas and the sheltered center of our country come out. I'm sorry about the abuse we 'straights' will continue to heap on you, and I'm inspired by your courage. I'll stand with you, and I'll perform your ceremony once I'm ordained.

3) Try not to internalize this, and don't let a thin California majority in this election lead you to question the sacredness of your union. Marriage is a sacrament in my tradition not when it is recognized by the state, but to the extent that it brings Grace, Love and Truth into your life. Don't let a society that is still full of bigots take that away from you - legally or spiritually.

Here's to Gay Marriage and the possibility of a Queer President in 2016.
Email Post
Labels: Politics religion The Gays

Shayne Mathis said…
I can understand gay marriage legislation being voted down here in the midwest - it's not like we're the pinnacle of tolerance after all. But California? Seriously?!

I think this whole debacle illustrates that there is, sadly, always going to be a group to discriminate against. It's really a school yard bully mentality. Even people who should know better are going to find someone less popular to pick on.
November 7, 2008 at 4:19 PM

Anonymous said…
Tim- what a great site! I happened across it while joining the No on 8 site. Thank you for your ability to speak from you heart space on very personal thoughts. Kudos to you and to your brother! peace and blessings, your office mate and devout Metholic ~S
November 7, 2008 at 6:51 PM

Anonymous said…
You all can blame those voters in MA who decided that when they passed this same law in MA it was ok for them to educate the children in thier schools of this "marriage." Also those who decided to sue churches for not marrying "partners." If it is equality you want then quit sueing churches for deciding that it is against thier beleifs to marry same-sex. It's their religion and right to refuse anyone. And don't send a man to jail for refusing to allow his child to learn about gay marriage in school ( http://link.brightcove.com/services/player/bcpid1815825713 and http://www.youtube.com/watch?v=WLHWBWSaW-4 ). Homophobia...I don't think so.
November 7, 2008 at 7:44 PM

Anonymous said…
Bravo, Tim! Thanks for this post. I'm happy to count you among my big-hearted, justice-minded friends and colleagues!
November 7, 2008 at 11:49 PM

Shayne Mathis said…
I wish my posts got angry, anonymous comments from people with poor spelling skills.
November 8, 2008 at 4:33 AM

Anonymous said…
1. What makes you think we haven't already had a queer president?

2. I just want equal tax consideration as a single person. I can't legally marry myself in protest and then file jointly...can I?
November 8, 2008 at 7:43 AM

Shayne Mathis said…
As a habitually single male, I would support legislation allowing me to marry myself for tax credits.
November 8, 2008 at 9:01 AM

Anonymous said…
Wes, 1) Always a fair question and 2) I understand your concern and I feel your pain. But for now you're going to have to be satisfied with a civil union with yourself.
November 8, 2008 at 8:00 PM

Unknown said…
Anonymous (the critical one, not the non-critical ones),

My sense is that 'homophobia' in a pure form is what we're talking about here. Both of those videos set up the idea that 'if you let the gays have marriage, your kids are going to be brainwashed' and more crudely 'the gays are your enemy'. Both of those suggestions are self-evidently untrue.

The dynamic here is the same one that has appeared throughout recent history when the disenfranchised have struggled for the opportunities afforded to the group in power. "If they get ______, then they'll ruin it for the rest of us!" Didn't happen when women got the vote or blacks got to share the same restroom with us, and it won't happen when the gays get marriage. You'll still be able to teach your kids what you want.

The question, of course, is whether or not you want to teach your kids that gay people are immoral, sinful, bad, whatever. That is something you should very seriously consider, because you're risking setting your kids up to be the equivalent of racists and misogynists, and frankly discrediting what I suspect is our shared religion. This is today's step in the Civil Rights movement.
November 9, 2008 at 4:54 PM

Anonymous said…
whats wrong with being a misogynist? why must you always speak hatred about my kind?
November 9, 2008 at 6:10 PM