Skip to main content
Labels
Posted by Unknown May 13, 2008 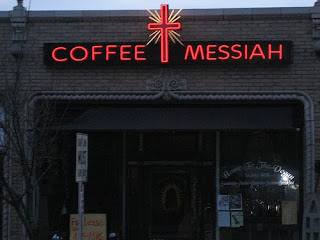 As disciplined as I've been in obsessing on this blog about religion and where I want to live, I was dismayed today when I took stock of how little time I've actually spent writing about religion in the place where I do live, on Capitol Hill in Seattle. I've decided to begin rectifying that situation, and made that topic the subject of consideration for today's afternoon constitutional.

Capitol Hill is a convergence zone for a bazillion people groups, so it's no surprise that even after three years I find it a hard place to characterize religiously. The most visible religious building and community is undoubtedly St. Mark's Episcopal Cathedral, which is the center of worship for a subset of the local community that can be fairly labeled as predominantly white, of the middle to upper classes, and liberal. It's also probably fair to say that St. Mark's is the epicenter for GLBTQ Christianity in the city as a whole, having had a prominent and active gay dean and an "open and affirming" policy for years.

It would be wrong to say that St. Mark's characterizes religion on Capitol Hill though, because it really is a mixed bag. There's a large Catholic population here along with the Episcopalians, but I think the Hill is most clearly a "spiritual" place, and non-traditionally religious. There are lots of yoga studios and such, and the grocery stores sell magazines like Tikkun and Tricycle. Having a large white liberal population, there's also a visible Cult of the Sunday Morning New York Times. The prominent hipster population here was probably best served by the now closed Coffee Messiah, which was only religious in an overly-defensive and self-consciously ironic sense. There are several Black churches within a few blocks of my house, but my feeling is that those really belong culturally more to the adjacent and historically African-American Central District than Capitol Hill proper. There are regularly Evangelical groups that try to "Win the Hill for Jesus", but the evidence seems to suggest that it's not working. (Apparently one of those used to meet in a Pizza parlor right down the road from us--Piecora's.) There are a smattering of traditional WASPy churches around, but I don't know much about their health. There is an old Christian Scientist Church building just down the road from us that is being turned into Condos, and it's close to an old Methodist Church that is now business offices. Now that the Christian Scientists are gone, the most unlikely church left on the Hill, if you ask me, is Volunteer Park Seventh Day Adventist Church. There's a cool looking Greek Orthodox Church called Church of the Assumption, but I don't know how anything about their congregation either. I haven't run into anyone who I knew was Greek Orthodox, but they tend to be stealthy :) Apparently, there are no longer any synagogues on Capitol Hill, though there is one close by on First Hill. I've seen Buddhist monks walking down Broadway, but don't know if there are any temples around. I guess my expert opinion would be that Capitol Hill is a ultimately a pretty decent microcosm of the religious diversity of the US as a whole. Its nucleus is comprised of disinterested agnostics and miscellaneous (though unusually liberal) Christians, with lots of fringe groups floating around the edges.

If you're wondering why I'm telling you all of this, it's because along with the thousand other things I might do in the next few years, I might be working here on the Hill on some sort of missional front. (Yes, Wesley, I am confused.) With that in mind, I've probably got another post forthcoming, on what I think religion should look like on Capitol Hill...
Email Post
Labels: religion Religion and Ministry Seattle Living

Anonymous said…
adventists on the hill. why the hell would adventists be in seattle? they dont even use black pepper for god's sake.
May 14, 2008 at 9:21 PM