Sheesh. Life has been heavy lately for about fifty different reasons. Tonight, God willing, for the next four hours I'm going to sit here. I'm going to eat a mildly disgusting dinner concocted from Naan, spinach, salsa and cheese. Then I'm going to bed.

In the meantime, per Wes' demand, I'm going to post another Seattle blog walk. (For those new to the blog, that's when I walk around town taking crappy pictures, post the results on the internet, and talk about my experience. I also like to call my walks "Urban Caminos", because it sounds super pretentious in a religious way) I had to run to the library for Angel and it was a perfect Seattle Spring night (sorry Ohio), so I decided to make an event of it. It's a nice long one. Here's what my afternoon looked like: 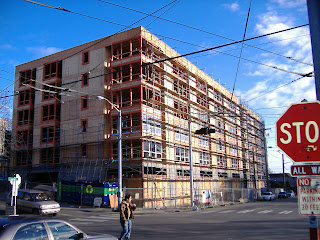 Actually, this is what Seattle looks like these days--and particularly our neighborhood. Apparently nobody has notified us about the Housing bubble breaking, because up go the condos. Just waiting for that to catch up with us about the time Angel and I are trying to sell... 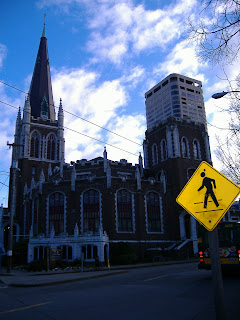 Here's what non-Mars Hill Baptists look like in Seattle. You probably wouldn't recognize them if you're from the South. They're not the same breed. Urban Baptists, kinder and gentler. This is Seattle First Baptist, a Church close by our original apartment on First Hill, and a few blocks down the way from our present place. 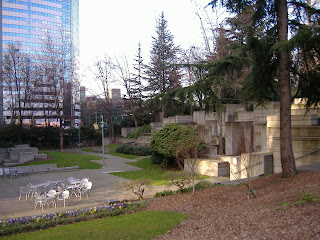 Here's what Exhibit F looks like in Seattle's trial for ill-advised public park building. This one's called "Freeway Park", and it's as appealing as it sounds. It's also known as "Murder Park", I think because someone got killed there 20 years ago, and Seattle urbanites don't forget these things. One of Angel's co-workers told her that they don't turn on the many built-in fountains here because the noise covers the screams, so no one can hear you being attacked. (They truly are never on, summer or winter). Like "underpass park", also a nice place to take the children for a picnic in the evening. 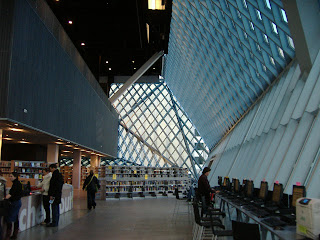 I've posted pictures of the exterior of the Seattle Public Library: Central Branch in the past. For my money, it really must be the coolest library in the world. Here's a representative shot of the interior. I had to pick up a book for Angel on nursing, and a book for myself on Mother Theresa. This is the upper lobby. It's worth a Google search to view more images of the place. On top of looking cool, they have every movie I've ever wanted to watch in their catalog, so we use it like a free Netflix system. (This was actually my walk destination. I was going to go to the Pike Place Market afterwards for shots of touristy Seattle on a Saturday evening, but for some reason I feel too self-conscious taking pictures in touristy places around town. I don't want people lumping me in with "one of them" when I'm obviously "one of us".) 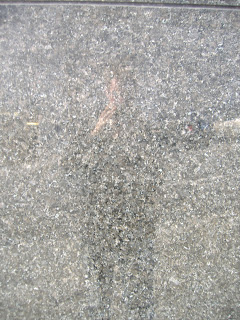 This is as artsy as I ever hope to be. Can you see postmodern me through the looking glass darkly? I posted this one b/c I like to include photos of myself, and the other one I took made me look like a moron. 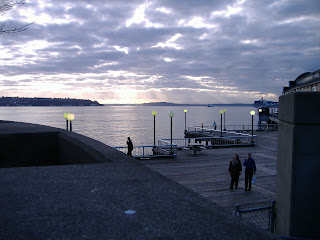 Instead of going to the Market, I went straight for the Seattle Waterfront. Here are a few shots from along the way. 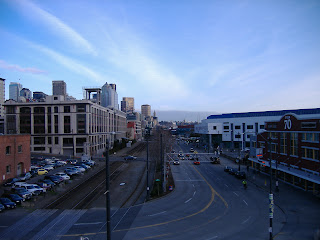 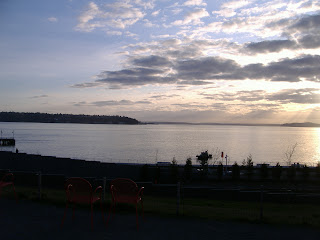 Being the up and coming/outdoorsy city that it is, Seattle recently opened a really nice outdoor "Art Park". Certainly very white (seriously, click on the link, it's a much better site than mine), but also a very nice place to go on a cool Saturday evening in the Spring. This is a picture of their amphitheater and signature piece of art: 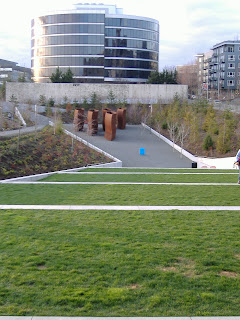 On the way back home from the Art Park, I walked through Belltown, which is, I think, the most expensive neighborhood in Seattle per square foot, and the home of dozens of giant condo buildings full of Yuppies. About 15 years ago, Belltown was kind of like Capitol Hill is now--the center of the music scene, a little grimy, and quickly gentrifying. Now, the gentrification is officially complete. The final picture below is evidence. It's a shot of the inside of the recently closed Crocodile Cafe. During the '90s and early '00s, this place was the heart of the Seattle music scene, which of course meant that Nirvana, Mudhoney, The Murder City Devils, Sunny Day Real Estate, Band of Horses, Death Cab for Cutie, Modest Mouse, Pearl Jam and every other Seattle band played there and thought it was cool. (Incidentally, my manager from Specialty Bottle used to hang out there with Greg Dulli from the Afghan Whigs and Peter Buck from R.E.M. Peter Buck was part owner with his wife, and encouraged my manager to pursue a career aboard a cruise ship. He didn't, and he's still at Specialty Bottle, but Peter Buck ended up getting a divorce, so who's to say who was right?) Now the Crocodile is just another victim of rising real estate costs (and the fact that no one wants to go to Yuppie Central for Indie rock shows. No offense yuppies). 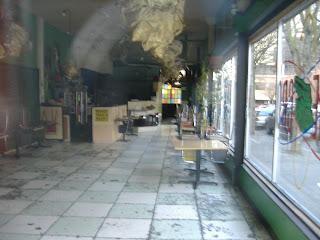 In concluding these Blog Walk Blogs, I will often include my reflections from the experience. I'm not really in a reflecting mood this evening, so instead I'll include the random selections from my iPod playlist that I listened to during the walk so I wouldn't have to reflect. Thanks media, for your mind numbing effects:

1. Sufjan Stephens: In this Temple as in the hearts of man for whom he saved the Earth
2. Johnny Cash: I got Stripes
3. The Afghan Whigs: I Keep Coming Back
4. Paul Simon: Homeless
5. u2: Wild Honey
6.The Arcade Fire: Intervention
7. u2: Zooropa
8. u2: The First Time
9. Dido: Thank You
10. The Murder City Devils: Tell You Brother
11. Dido: Hunter
12. Bruce Springsteen: Eyes on the Prize
13. Split Enz: Message to my Girl
14. Sinead O'Connor: Special Cases
15. Radiohead: Body Snatchers
16.The Arcade Fire: Black Mirror
17. Murder City Devils: Demon Brother
18. u2: City of Blinding Light
19. Radiohead: House of Cards
20. Dido: Life for Rent
21. Springsteen: State Trooper
22. Springsteen: Paradise
23. The Pogues: Metropolis
24. Murder City Devils: Get off the Floor
25.Murder City Devils: In This Town
26. The Pogues: Sit Down by the Fire
27. Crowded House: Pineapple Head
28. Springsteen: We Shall Overcome
29. Johnny Cash: Jackson
30. The Pogues: Bottle of Smoke
31. u2: Who's Gonna Ride Your Wild Horses?
Email Post
Labels: Blog Walking

Anonymous said…
are there any actual parks in seattle with trees that werent planted last year? all the parks seem so...artificial...planned. i guess one has to wander outside the city.
March 11, 2008 at 10:23 PM

Unknown said…
Actually, Seattle as a whole has a fresh out of the wrapper feel. It's because software millionaires and developers here like to tear down everything old to build new condos and parks and urban density. There's a lot of history here, but most of it is buried in the dump down the road from my old job.

There are two exceptions that I've come across. One is Volunteer Park, an old Olmstead Park near our house, and the other is Discovery Park (where I took a previous blog walk), which was preserved b/c it was an Army base used for training, etc.

Anonymous said…
portland is getting a lot of positive press. a friend i work with just got back from vacationing in portalnd and she loved it. food news on npr was talking about how chefs have more creative freedom in portland as opposed to seattle because of lower rent in portland. and if im not mistaken, the city itself is restricted from expanding into the countryside. urban boundary something-or-other.
March 12, 2008 at 5:53 PM