After having realized that my commitment to walking all over the city has had it's desired effect--that is, helping me to not hate living in the city anymore--I decided that it was time to allow myself to go back to walking where I like for a day, at Discovery Park in the Magnolia neighborhood. Here are some photo highlights for your enjoyment. 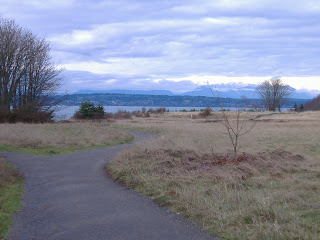 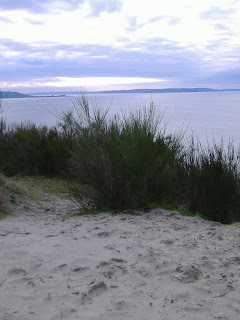 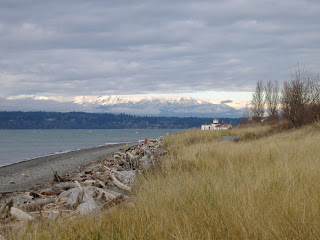 The Park's small peninsula, with beach, lighthouse, and Olympic Mountains in the background. 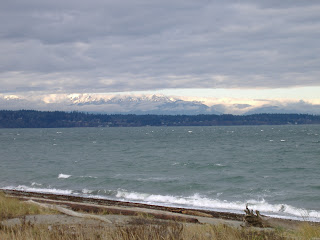 And one more shot of the Olympics across the water.

Being back out away in the "natural" (that is, not yet covered in concrete) world got me thinking back on two things: New Zealand, and my science/ecology and faith interest. In a few months I'll be presenting at St. Margaret's about the theological foundations for environmental concern and action, and might do the same at a national Environment and Faith conference that our diocese is hosting.

To dash off a few of my initial thoughts in that direction:

1. Lynn White in the 1970's essentially blamed Christian faith, and the biblical call to subdue the earth, for our present environmental crisis, and the idea that Christians are anti-environment is pretty widespread among religion's modern cultured despisers. That's a bit silly, in part because sociological studies have repeatedly shown that religious faith doesn't generally have direct causal control over human action, even among the most religious, but also because it ignores a significant portion of Christian tradition, which views the earth as Creation and humans as stewards and protectors. That emphasis has been visibly present in Christian tradition as long there's been such a thing, while those who have taught the "subdue" theology essentially appeared around the time of the industrial revolution, when "subduing" the earth became both possible and lucrative. (It's also been popular among the "Last Days" crowd--which should be noted as a Christian minority--since it doesn't seem to matter much if we destroy creation, since Jesus will be back to wipe it out soon anyway). Christians need to accept responsibility where it exists, since we have been complicit in the abuse of nature, but lets not allow ourselves to be used as a scapegoat.

2. There's recently been a significant theological shift towards panentheism--the idea that God's spirit is present in all of creation (though God godself transcends it--which is what distinguishes this from pantheism). This theology undergirds much of recent Christian environmentalism and eco-spirituality. Our experience of God in the grandeur, beauty, mystery and tumult of nature is a true indicator of God's presence there, not a sort of pagan sentimentalism. It's also a foundation of our moral imperative to treat creation with respect.

4. If you don't like all of this nature stuff, our environmental crisis is also a serious human problem (which is really why most care about it anyway). We're screwing things up, and the poor will be the most deeply affected. The Church has a responsibility to not be complicit in that.
Email Post
Labels: Blog Walking Seattle Living Travels