A Stroll Around the Lake

Those of you paying attention might have wondered if I'd given up on my blogwalking habit. In fact, I have not--I've just not had the opportunity to take one in weeks! Today, however, I got up early and decided to work off some of that Thanksgiving fat by taking a walk around Lake Union, which I think ended up being about 8 miles. Now I'm knackered.

Here are some photos and captions: 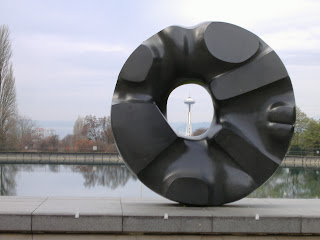 This is a photo which lots of people take, from Volunteer Park on Capitol Hill near where we live. 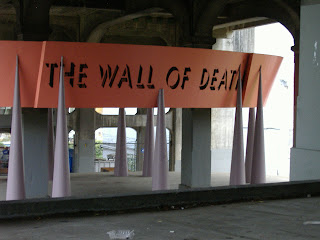 I'm not sure what this is all about. It's under a bridge on the Burke-Gilman Trail, in Seattle's University District. I love the strange and giant things you find in public places in this city--particularly under bridges. 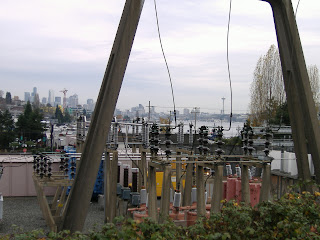 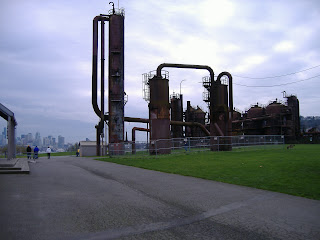 Another strange Seattle Park, which I happened to wander into today--Gasworks Park. It's actually just a fenced off, rusty old Gasworks, but it's got a great view of the city, so people like to spend summer afternoon's laying here. 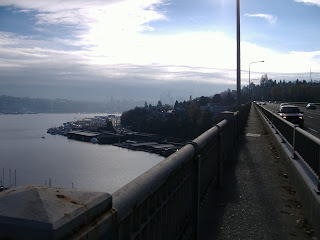 On the last part of my walk, I crossed the surprisingly shaky Aurora Bridge, walking beside Hwy 99 in terror (sissy that I am) with the abyss to the left of me and speeding traffic to the right. It's a popular suicide spot, so it's a bit of a sobering walk.

I realized today as I was circling the city that my blogwalking discipline has been extremely successful in achieving its desired effect. That is, I started out generally disliking the city and feeling that I needed to escape it in order to feel peace, and now genuinely enjoy living in the urban mess. If you said such things, I guess you could say that I've come to peace with my surroundings. Even on a cold, grey winter day, I was thinking that I really do like it here. Now, if I could just come to peace with the suburbs...
Email Post
Labels: Blog Walking Seattle Living Travels