Take me down to Columbia City

It seems that every time I start to feel okay about the US, something else comes up to ruin it. Last night I found out about the "Medicare Donut", which refers to the hole in the middle of Medicare coverage. That is, when Medicare expenses during a year exceed $3600 (or something like that), suddenly you're no longer covered and have to pay all of your medical expenses out of pocket until your own personal costs reach $2300 (or something like that). After that, you're covered again. Of course, if you don't have that money (which you very well may not, seeing as how you're on Medicare), well, you're screwed, and I hope you enjoyed being healthy and pain free during the first half of your year, because you won't get to experience that again until next year--unless you die, and there's a heaven. This situation came up last night for a diabetic friend (who also has AIDS) when she went to pick up an insulin prescription, and the cost was unexpectedly 10x what she normally pays. Happy Halloween! Insulin, as you may know, is not an optional or cheap medication, but luckily a friend (also disabled, on Medicare, and unable to get medical treatment) was able to cover her costs for the next 6 weeks, but then what? Which makes me ask once again, what the Hell is wrong with us?!

In that spirit, today I decided to take a walk through some of Seattle's least gentrified neighborhoods, among it's Medicare and Medicaid recipients, ending in Columbia City. My path took me through the Central District, along the edges of the International District, through the Rainier Valley, and finally into Columbia City.

Quite an interesting walk, actually, which reinforced my feelings of ambivalence to my country of origin. The Central District is actually technically where we live, I think, but begins culturally a few blocks down the road from us. It's the historically African-American part of town, and generally working class. It's slowly gentrifying, and the buildings are an interesting mix of new condo developments, old houses, shiny new chain restaurants, and old neighborhood stores. In one place, there was an Audi SUV parked in a set of new townhomes across the street from the dilapidated and anachronistically named "Afro-mart", from which loud music was blaring. Seattle's worlds are colliding. The most memorable part of my walk through my neighborhood was that a group of teenage boys (no school today for most of Seattle for some reason) yelled at me to "Get the f*** out, White Boy!". I did, slowly, at a walking pace. I hope they're happy.

After that I walked through the Eritrean and Ethiopian section of the International District, which I had heretofore never seen. Once again, walking gives you perspective on things, and this walk helped me to realize the scope of the African community in Seattle, which is surprisingly large. When I think of the ID, I think of Seattle's large Asian population and Chinatown, but I was mostly surrounded by Africans for almost the whole of my 5 mile walk to Columbia City--Ethiopians, Eritreans, and Somalis notably, judging by the names of restaurants and community centers. I would guess that that community is at least as large as the hipster Capitol Hill community, of which I am of course an integral part. 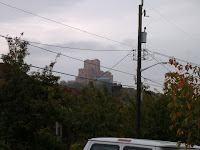 A picture of Seattle's art deco VA Hospital, on top of Beacon Hill, on the west side of the Rainier Valley

The name "Rainier Valley" evokes a sort of beauty that's not reflected in the actual neighborhood (although there is a great view of Mt. Rainier on clear days from many locations). It's mostly a typical American strip mall street--McDonalds, Starbucks, Lowe's, Safeway, KFC, Starbucks, McDonalds, Lowe's, plastic grocery bag filled with puke, Safeway, Tully's, bus stop, Burger King, Starbucks, etc. There's also the real American Dream though, because it's miles and miles of Africans, African-Americans, hispanics, whites, Asians, middle-easterners, immigrants, locals, Italians, money grubbing developers, Christians, Muslims, Buddhists, Sikhs, old people, and so forth. I have to admit that that is the America that I'm proud to be a part of. From what I can tell, we are the world's best example of the blending of cultures. Every country has that to some extent, but it's something for which we strive and take pride in. It can be a huge mess and pretty ugly, like our country as a whole, but it's the result of America's noble attempt to affirm the humanity of all and provide a home for all comers. That's changed significantly post-911, and I think that's a real tragedy. The terrorists truly are winning, though I don't think they're accomplishing what they set out to do. 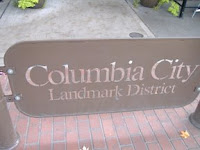 Columbia City is really an extension of all this. It used to be a distinct town, I believe, but Seattle has grown into it. It's still a nice little neighborhood populated by all sorts of people, apparently. I didn't stick around long, because a bus came at a fortuitous time, and I was ready to be done walking anyway. On the bus back I sat in front of a couple of teenage girls, talking the whole way about doing Ice, Coke and Marijuana, sleeping with boys and disobeying their parents. An appropriate way to end my walk.
Email Post
Labels: Blog Walking Seattle Living Travels