For the next several months while Angel's working overtime at school, and I'm working overtime to pay the bills, I've realized that we're not going to have much time or money, which means we're not going to have much time to get out of the city to go for hikes. My theme for the youth group this year is "Finding God in the Mess", and in line with that I've decided that for the next few months, as grey and rain descend upon Seattle, I'm going to take up the practice of "Urban Hiking", also known by the less pretentious as walking around the city. I generally find the city to be repulsive and dirty (not Seattle in particular, but the city in general), but I'm going to make an attempt to find beauty and transcendence here. Rather than taking my usual Friday or Saturday jaunts to the park or the mountains, several times a month I'm just going to walk to from home to different neighborhoods in Seattle, and try to provide some photo documentation.

Today, for my first trip, I walked from Capitol Hill to downtown. It wasn't a long hike--about two hours total including a stop at the Central library, which is one of the more interesting libraries I've been to architecturally. (I didn't take any pictures but I have stolen some for your enjoyment):

I can't say that I had any moments of transcendence, but I did have a nice view of Lake Union from 4th avenue on the way from Pike St. to the Library (In this photo background you see the Lake and some people I don't know--I stole it from Flikr. I have a very similar hat and shirt to the guy in the picture, so you can pretend that it is a picture of Angel and I):

After that, I passed several people who asked me for change. 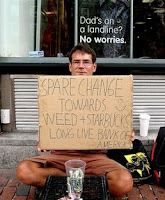 I have to admit that one of the reasons I find the city distasteful is that you're constantly being hassled to give people on the street money. (As a result, it's almost impossible to go on an "Urban Hike" without either spending money at a shop or giving away money to someone panhandling.) When one lives in this sort of environment, the sad thing is that you become accustomed to giving beggars the stiff-arm--you almost have to, b/c you only have so much change, and you only have so much compassion. (Don't get me wrong, I'm not the "get a job, bum" type, and I'm not averse to giving people money on the street from time to time--sure, they might spend it on alcohol or drugs, or they might be better served if I gave the money to an organized charity, but honestly, most of the people I know spend their money on alcohol and drugs, and I wasn't going to give that 50 cents to charity anyway. I was probably going to use it to buy junkfood.) You ultimately are going to distance yourself from the situation, because you can't spend all day dwelling on other people's plight. I used the think that that would be the Christian thing to do, but it really doesn't accomplish anything--sure, work to make things better, but if you don't distance yourself from most individual situations, you're going to have a guilt driven nervous breakdown. I don't know where the epiphany is in there, but I'm pretty sure there's something of a lesson about God's love and our own ultimate limitations in that.

After the panhandlers, I went on to be hassled by another type of beggar, at Bed, Bath and Beyond. I've got some friends who are getting married, and their shower is this afternoon, so I had to pick up a gift. I got a corkscrew and a spoonholder (the same cash could have bought a beggar about 5 meals, or one bottle of really good whiskey, but nevermind).

From there, I hiked back home, up the famous Pike/Pine corridor, past lots of new condo developments and small businesses selling hip and gritty urban home decor. My first excursion being a huge success, I'm hoping next Friday morning to walk from my house to the Fremont troll. That's about a 4 mile hike, so I'll probably bus back. I also might not make it then, b/c next week's busy.
Email Post
Labels: Blog Walking Seattle Living Travels