Went back to Ohio, and my city was gone, etc.

Notable Events of the Month

June 2: Sent an email to our local Episcopal Diocese asking for help for a friend who is a Katrina survivor. She was looking for housing, and had been repeatedly turned down apparently owing to the fact that she's black, on a gov't housing subsidy, and the mother of 9 children, 6 of which still live with her.

June 6 (or thereabouts): Got a form response from the diocese talking about all of the ways in which we're providing support for folks in the Gulf Coast region, which had nothing at all to do with the question I asked. Original email apparently went unread.

June 14-16: Spent relaxing weekend in Bellingham, WA after dropping Angel off for a flight to Ohio.

June 21: Flew to Ohio for wedding of Angel's brother Allen to his now-bride Rachel. 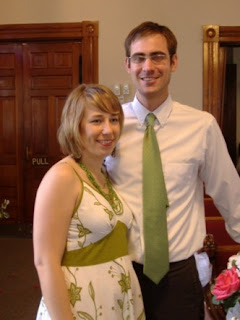 June 28: Discovered that Katrina survivor friend still was without housing, and was less than a week from eviction from present housing. Sent email request for help to diocesan folks including the phrase "fucking pissed" (very unlike me to be so abrasive).

June 30: Saw Michael Moore's "Sicko". Would highly recommend it as a surprisingly levelheaded portrayal of the need for universal healthcare in the US, and the possibility thereof.

July 1: Found out friend has found housing (admittedly not due to my assistance or that of the diocese). Began to think of myself as a career do-gooder.
Email Post
Labels: Travels