Of Gays and Bavarians

Summer is here, which for Angel and I means a bit of a break from a gruelling school-year schedule. The last two weekends we've taken advantage of the slow down by heading out of Seattle, last week to Hood Canal, and this week to Leavenworth. (Friday was also our 5 year (!) anniversary). 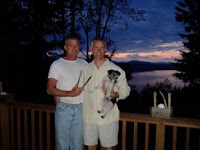 After last weekend, I was thinking that if homosexuality is contagious, I probably shouldn't take any transcontinental flights. Angel and I spent the weekend in a condo with one of her co-workers, a gay male, and his partner. (Both great guys: Steve somewhat of the flamboyant gay, and his partner a quiet farmboy--kind of a Brokeback Mountain type, thankfully without the repression.) Entertainment was provided by Madonna, Patsy Cline, tennis, and a fashion doggy named Blue.

Upon our return to Seattle, we capped the weekend off by spending an evening as the token straight couple at a gay barbeque, put on by a friend of mine who is an Episcopal priest. No Patsy Cline, but much lascivious gay joking. I could say a lot about the valuable insight I've gained into the plight of homosexuals in America since moving to Seattle, but I have to admit that I was having a bit of an anxiety attack by the end of the long weekend. At work on Tuesday, all I could think about was how much I needed to watch Nascar and drink Michelob for a few days. 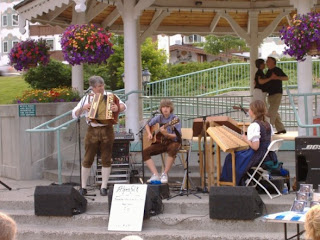 This weekend, for the anniversary, we entered an equally foreign world by going to Leavenworth, Washington--one of those quintisentially American cities which caricatures some European place--in this case, Bavaria. I have to admit that Leavenworth does it better than most, and it was hard to find a place that wasn't flavored Americo-Bavarian. They'd apparently forced all of the corporations that set up shop to conform, because even the Starbucks had tacky paintings of men in Leiderhosen on the exterior walls. We had sausage and sauerkraut for three straight meals.

I say all this to highlight the point that I don't know who I am anymore. What happened to the innocent Ohio boy who wanted to live in Middletown and be a preacher when he grew up? It's as if Patsy Cline broke a guitar over his head, stuck him in a brainwashing chamber, and propped his eyes open with toothpicks.

Anonymous said…
Well, I suppose it's better to be the innocent Ohio boy who wanted to live in Middletown and ending up not, than to be the get-the-hell-out-of-Ohio boy and ending up living in Cincinnati.
June 4, 2007 at 5:37 PM